Since mid-2015, the Ukrainian economy has been recovering from the severe recession suffered in the years before. While the gross domestic product (GDP) increased by almost 2.5 percent respectively in the past two years, investments in the economy are growing at a much more rapid pace. According to the official Ukrainian statistics, investments increased by 5-6 percent each in the past two years compared to the respective previous quarter. In a year-on-year comparison, this means a strong growth of just below 20 percent each for the past two years. In 2017, the investment activity exceeded the pre-crisis level of 2013 again for the first time. 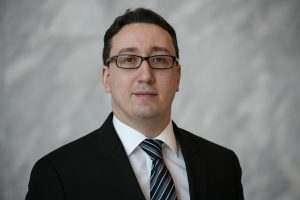 This positive development continues. In the fourth quarter of 2017 – for which detailed data are already available – capital investments in means of production increased by 8 percent quarter on quarter and by 16.7 percent year on year. The National Bank of Ukraine states in its most recent inflation report from April 2018 that the robust investment activity covered most sectors of the economy. The bank considers this investment activity to be supported by several factors: firstly, the companies have more positive expectations (as expressed in more optimistic company surveys); secondly, the financial standing of many companies has improved; thirdly, public-sector investment has been stepped up; and lastly, a number of state-owned enterprises have raised their investment expenditures as well. This means that in addition to private consumption, investments are an important growth driver for the overall economy at the moment. For the first quarter of 2018, the National Bank estimates a GDP growth rate of 2.3 percent compared to the same period last year, which means it expects the present moderate-to-positive growth trend to continue. To some extent, however, investment growth rates will level off, as the low base effect will become less important.

In the past year 2017, most of these investments went to the industrial sector (33 percent of total investments), the agricultural sector (14 percent) and construction (12 percent). Approximately a fourth of the total investment amount was spent on investments in buildings, and more than half was used for machines and equipment. Furthermore, about 13 percent of the investments were spent on new means of transport, e.g. the purchase of new railway wagons. The investments were financed mainly from own resources (almost 70 percent) as well as public funds of the government budget and regional budgets (12.7 percent). Bank loans (5.3 percent) and funds of foreign investors (1.4 percent) played only a minor role.

Despite the positive developments described above, the investment level in Ukraine remains too low in an international comparison. Capital investments as a percentage of GDP amounted to an average of only 16.4 percent in the period of 2009 through 2017. This value has recently recovered somewhat from the low of 13.5 percent (reached in 2015) but still reached only 15.7 percent once again in 2017 – which is lower than corresponding values in the neighbouring country of Poland or in the Federal Republic of Germany where investments amount to almost 20 percent of the economic output. The percentage in Russia has been even a little higher (a stable 21-22 percent) these past few years but is nevertheless clearly outperformed by the investment activity in Romania (almost 26 percent of the GDP), a country which enjoys strong growth at the moment. A similarly high investment ratio was achieved in Ukraine only during the economic boom of 2004-2008 (with a share of 22 to 27 percent of the GDP). Back then, however, a not inconsiderable part of the investments flowed into a real estate bubble which burst with the financial crisis of 2009. This goes to show that it is not only the quantity of the investments undertaken which is important – but also their quality or sustainability.

On the one hand, the fact that the investment ratio in Ukraine is low by international standards can be attributed to the political, economic and military conflict with Russia. On the other hand, continuously low investment ratios are also evidence of deeper-seated structural problems impeding investment activity, such as a high level of corruption, overly complex bureaucracy, or an underdeveloped financial sector.

Foreign direct investments are another important indicator of the attractiveness of an investment location. While approximately USD 6 bn (or 4 percent of the GDP) per year flowed into Ukraine in the years 2009-2013, this volume was reduced by half to about USD 3 bn (2-3 percent of the GDP) in the years 2015-2017. The fact that the level of direct investments was very low in the crisis year of 2014 is hardly surprising.

However, even these volumes are distorted upwards. In part, financial flows of Ukrainian business groups from offshore centres are “disguised” as direct investments. Furthermore, foreign banking groups converted debt claims worth more than USD 4 bn (about 4 percent of the GDP) against their Ukrainian subsidiaries into equity capital over the past three years in order to recapitalise their subsidiaries, which appears as direct investments in the statistics. Actual foreign direct investments are therefore likely to have been lower still: for the period of 2015-2017, they ought to be lower than 2 percent of the GDP per year. These low volumes reflect the continuing caution on the part of foreign investors. Moreover, the observed volumes are too low in order to generate a clear boost of economic modernisation.

In summary, it can be said that while investments in Ukraine are currently growing very dynamically in a cyclical economic recovery, they nevertheless come from a low starting point due to structural issues and the military conflict. As a consequence, there is still “room for improvement”.

Foreign direct investments and Ukrainian banks are not playing a major role in the provision of investment funds at the moment. For a sustainable development of the Ukrainian economy, a further increase of investment activity (esp. investments in infrastructure) as well as of foreign investments and the granting of loans for investment purposes would be desirable. In this context, the recurring cycles of strong overheating and deep recession ought to be avoided.

Dipl. Vw. Andreas Schwabe, CFA is an analyst for Eastern Europe with a focus on Russia and Belarus at the economics department of Raiffeisen Bank International in Vienna.