“Streaming is the new flying” 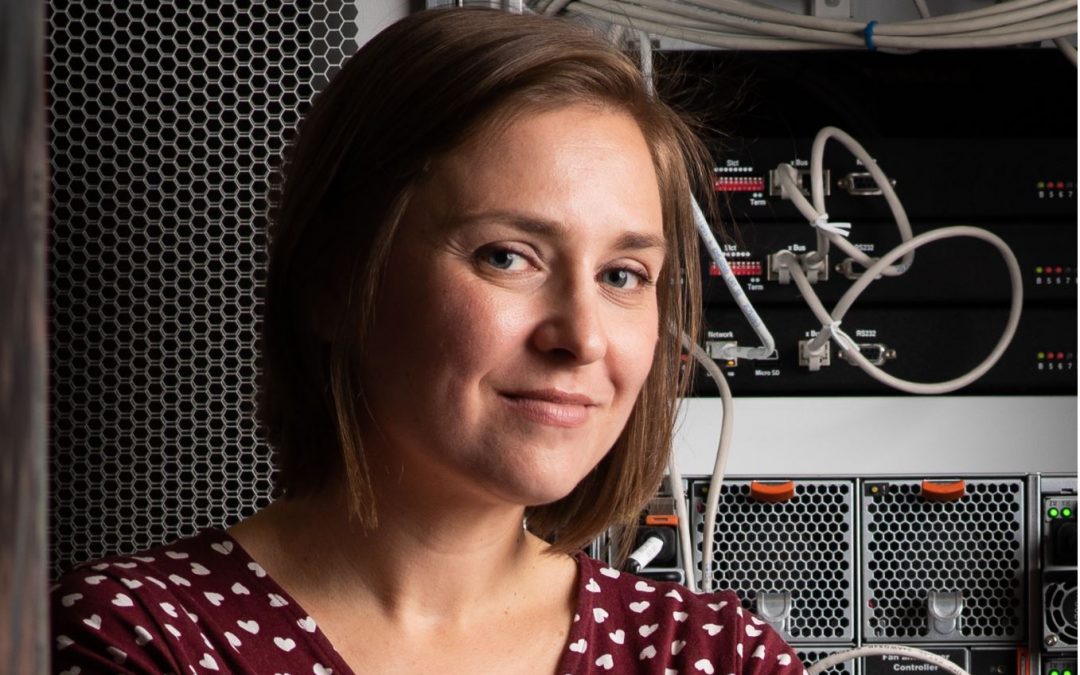 The most important global megatrends include digital transformation as well as sustainability. In the field of IT, these topics tend to collide rather friction loaded. The steadily increasing consumption of resources affects professional and private life alike, for example through the sharp rise in streaming. Ivona Brandic, computer scientist and professor at TU Wien, knows how our technology consumption will affect the worldwide carbon footprint and why we need to think globally for solutions. An insight into science.

The increase of digitalisation brings many positive developments and at the same time numerous negative consequences – especially in the area of sustainability. What are the blessings and the curses?

There are clearly two sides of the same coin. Digitalisation is changing our lives enormously. For years, machines and robots have been taking over heavy or monotonous work from humans. Occupational fields are changing, new ones are appearing, and old ones are disappearing – this is creating a strong dynamic in the education sector and the labour market. Doing an apprenticeship and then working in that profession for the rest of your life will no longer work. Our education system can’t keep up, so we need new structures.

But back to the advantages: Digitalisation makes it possible for life to go on even under the most adverse circumstances – keyword pandemic. Many people can work from home and stay in touch with their families. But what you can’t see or feel: That IT logically needs electricity and that will continue to be the case in the future. We can run a car on hydrogen. In smartphones, tablets and PCs, however, there is too little space for that, so electricity is the only solution. And electricity consumption in the IT sector is increasing enormously – not least because of the pandemic. We stream meetings and lectures, and all these computers and network connections need to be powered.

How many devices need electricity worldwide?

In 2014, there were around 10 billion devices worldwide, such as computers or smartphones. By 2050, there will be more than 100 billion devices. By then, a light bulb that switches on automatically when it gets dark will also count as a computer. The shopping trolley in the supermarket will automatically generate the bill and our clothes will also be smart, shoes anyway, but even jackets will be equipped with small computers to regulate the temperature, for example.

When we stream movies and series, the data travels around the world and that takes up an ever-greater share of global energy consumption. How high is this data volume?

There are no concrete figures, but in the USA, for example, even before the pandemic, around 80 per cent of network loads were allocated to streaming. Streaming needs a lot of resources because a connection always must be established between the end device and the server. This is extremely inefficient. Overall, the share of worldwide electricity consumption for IT systems is currently 200 terawatt hours, about one per cent of total global electricity consumption. One third of this is used each, for data centres, networks and the generation of consumer devices such as TV sets or mobile phones. According to scientific forecasts, the costs for networks will triple, quadruple or even quintuple in the coming years. Likewise, we expect a boom in data centres because more and more data will be stored in the cloud.

How will the digital transformation affect climate change?

Currently, about one per cent of the world’s electricity is used for data centres. In 15 years, this percentage will be around 30 per cent. But that doesn’t include networks and end devices such as mobile phones or computers. Now you can work out what it means if all this electricity comes from brown energy. And if you consider the population explosion in developing countries where the energy transition is not an issue – the countries of the “first world” have the responsibility and the obligation to help. 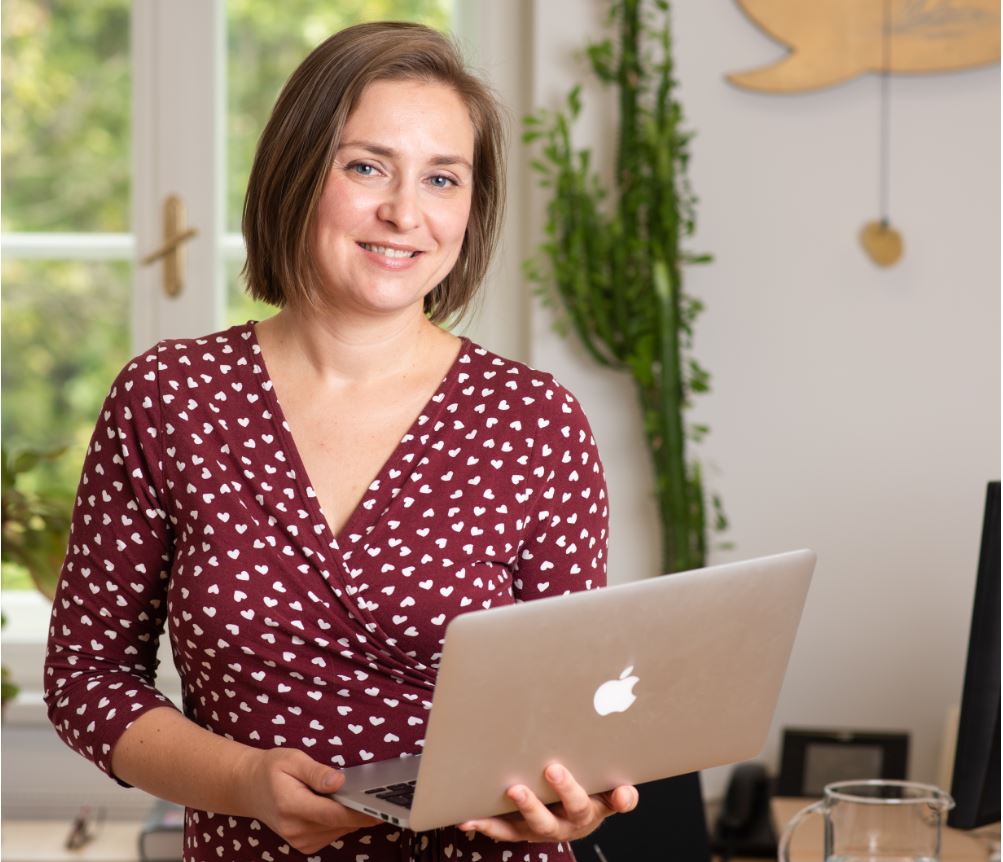 There are many innovative systems for cooling with lower power consumption. Usually, computers are cooled with small fans that are built directly into the chip. In data centres, water cooling systems are used. The so-called liquid cooling uses small pipes filled with cold water to remove the heat. The warm water can then be used to heat cities, for example.

In general, cloud computing is a good ecological model for building data centres. Amazon has established a sensible solution in this area. They built data centres for peak performance. In other words, for the servers to hold up even when the shopping for Christmas presents is happening on one single day. At the same time, the question has arisen: What do we do with this infrastructure for the remaining 364 days? And this is the service they offer on the market.

I also see the potential for optimisation in duplication. If I want to ensure that a service is always available, I must replicate it. This means that the same service runs on two servers at the same time. And one can think about that: Do I really have to keep the second computer running? Or can I distribute the computers in a way that ensures one of them is always running?

What other ways are there to save electricity in IT?

It is important to look at how the computer reacts to errors. Based on this knowledge, one can develop appropriate strategies that consume as little power as possible. You must assume that in a computer centre, errors are not the exception, but the rule. And we have to learn to deal with them in a way that doesn’t need several replications and the users still get the computing capacities. You can also train artificial intelligence in a sensible way so that it needs less power. And for recurring operations, we must ask ourselves: what is the most efficient way to upload an Instagram picture, for example? Globally, it makes sense to also look at supposedly “small” operations. Because the mass makes the difference. We need to learn energy-saving procedures. Companies also have an interest in making their processes energy efficient.

What do you think about a CO2 label on digital products?

I don’t think much of it. Even a person with a good general education can do little with it. You can’t expect citizens to deal with all the issues down to the smallest detail. That’s why we elect politicians who, based on expert opinions, make well-considered and sensible decisions on behalf of all the people of a country. But it must be clear to us that sooner or later electricity for IT will be taxed. And there must be incentives to switch to green electricity so that the investments are worthwhile for companies. Global solutions are needed, for the switchover to succeed on a large scale. It doesn’t help us if we have the perfect solution in Austria, globally our effect is minimal. We live together on our planet and therefore, are all affected. We need concrete measures and incentives from politics. 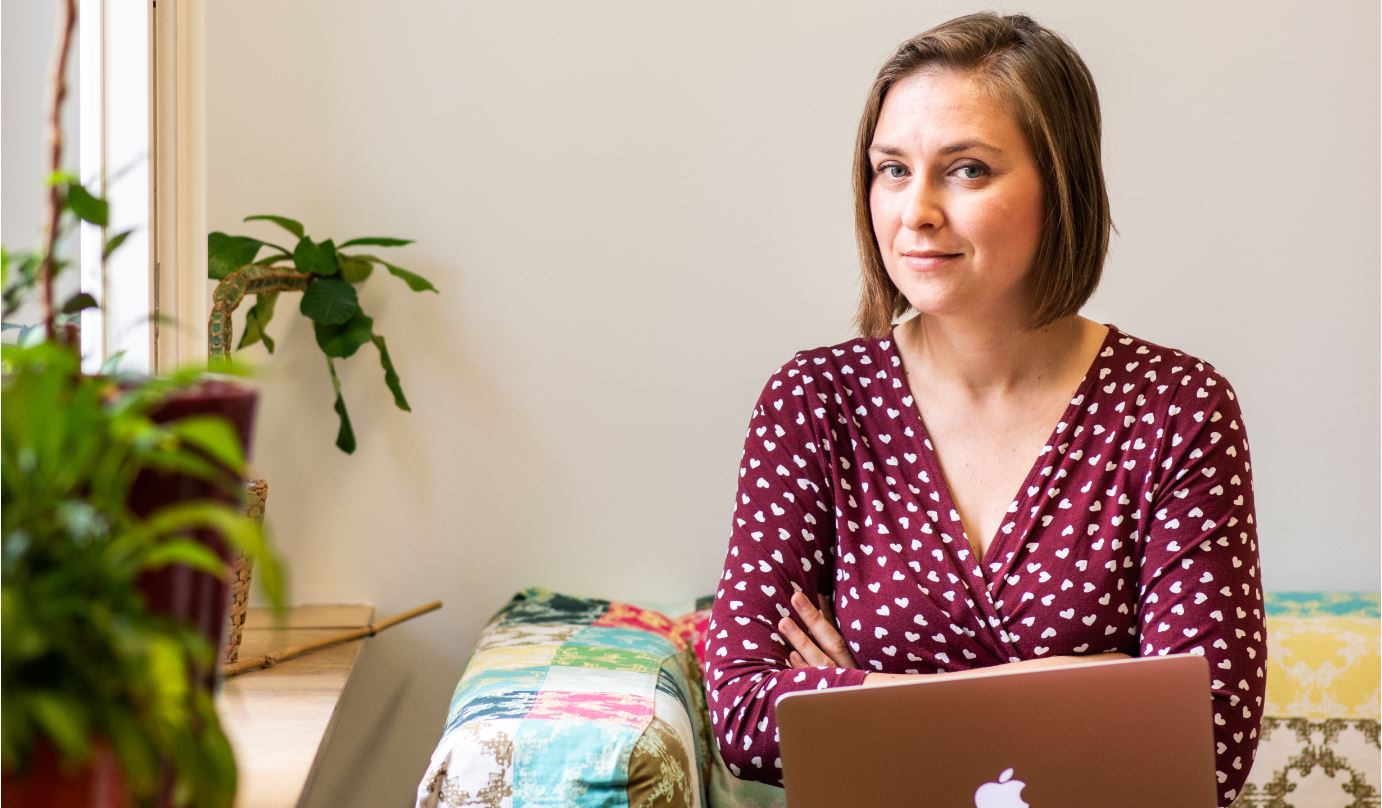 Is it possible to calculate how high the CO2 footprint, for example, of a Google query is?

It is difficult to give a figure, because it depends on so many parameters. Where the data centre is located, for example in Norway, you don’t need cooling. If, on the other hand, the content server is located in Austria, the data does not have to travel as far. In the end, however, all this is just a drop in the ocean. It is much more important to look at how many data centres and networks run on green power. Because the biggest problem is energy supply. In Europe, things look better, but globally, most energy comes from fossil fuels. India, for example, gets electricity from coal, Iraq from oil. If populous countries like China or India do not switch to renewable energies, an environmentally friendly Europe will be of little help. And this issue will not be solved quickly, because these countries have other substantial problems.

The increase in energy consumption in IT will occupy us intensively because, as you say, “the biggest turning point, the digital transformation, is still ahead of us”. How can we reduce the ecological footprint? Quantum computing? What role does artificial intelligence play in the multi-clouds you are researching?

We are at a tipping point where computers can’t keep up with the applications we use. Because they’re not designed to process data the way we do today, especially in the field of artificial intelligence and machine learning. Artificial Intelligence is the most inefficient thing you can have in computer science from an ecological point of view. Imagine: In the past, a human created a programme. Now we have artificial intelligence, i.e. meta-programmes that analyse vast amounts of data in order to create a programme.

This artificial intelligence analyses vast amounts of data in order to learn and then creates new programmes from these rules. The architectures we use are not designed for so many computing steps. Therefore, completely new computers are being built. One is the quantum computer, which can do the same calculations as the classical computer with a fraction of the energy. The other trend is neuromorphic computers, which try to imitate the human brain, i.e. the processing of information via synapses. A lot will happen in this area, because there is of course a lot of research and investment.

Keyword research: What social responsibility do scientists have?

We have multiple responsibilities. We generate new knowledge and can deal with fundamental questions independently of donors or interests. For individual companies, a minimal saving may be less interesting, but globally it adds up. It is therefore our responsibility to bring this knowledge to the outside world and to build awareness for this issue. In education, we sensitise the new generation of computer and data scientists. This is certainly a generational issue: I notice that many students don’t even think about buying a car in the future. The next generation has completely different life plans. The only question is: do we have that much time?

As an expert researching the topic, how carefree is your own technology consumption?

I reflect on my behaviour and try to find a balance. But I can’t influence, for example, where the electricity for my computer comes from. In the past, flying massively worsened the CO2 balance. Today, unfortunately, we have to say: streaming is the new flying. I also hold my lectures via stream, otherwise I can’t do my work. The pandemic gives us reason to change things permanently. We need a sensible plan for how the digital transformation should look like.

The most important thing is to think globally. Staying local here is a fatal mistake. It does us no good if we have the solution in Austria and the rest of the planet goes to pieces. I saw a lot during my research visits to India. Without a functioning garbage disposal system, every river there is filthy. In megacities like Bengaluru, you never see the sun because of the smog – never. Imagine that. 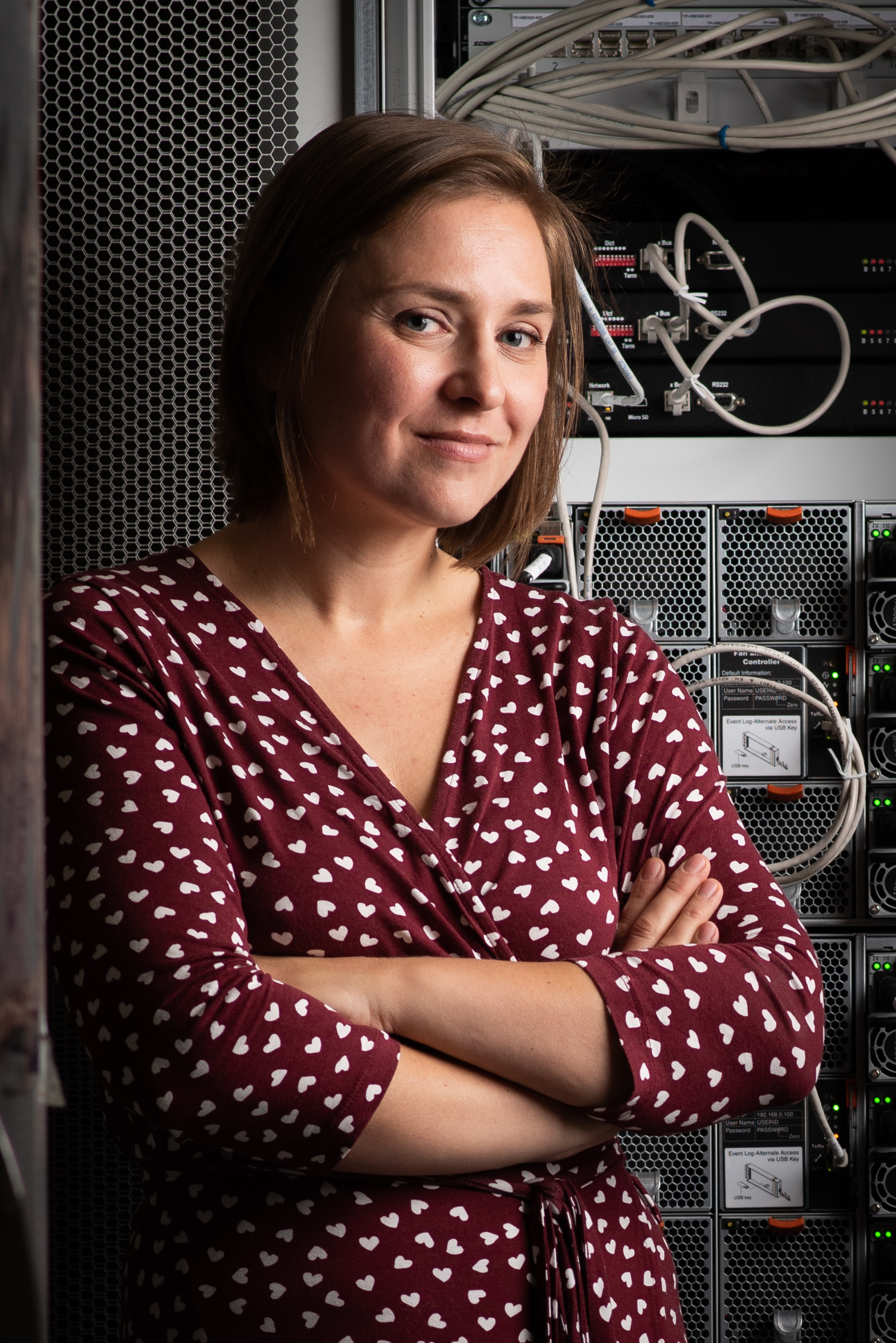 is computer scientist and professor at the Institute of Information Systems Engineering at the Vienna University of Technology. Her research and teaching interests include cloud computing and energy efficiency, with a focus on high performance computing.

From Brown to Green: Climate Change in Central & Eastern Europe

Podcast: How to enter the financial markets