Poland vs pandemic: a look through a Central European lens 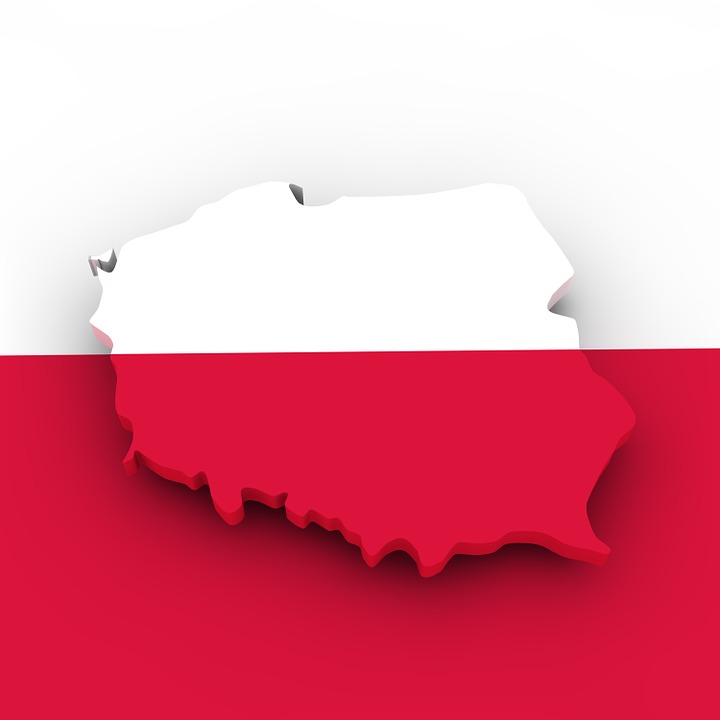 By Dorota Strauch, RBI in Poland, and Casper Engelen, RBI | 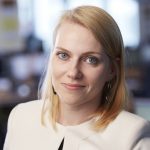 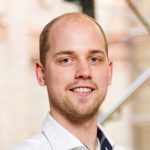 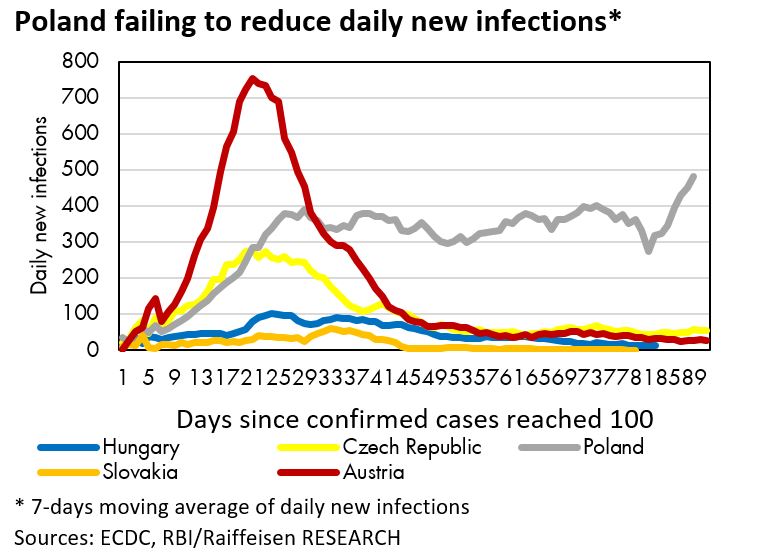 Similarly to other CE countries Poland reacted fast to the spread of the pandemic in Europe. It shut its borders at the end of March and ordered to close schools, shops, bars and restaurants within less than 10 days since the first confirmed COVID-19 case in the country. The stringent measures taken by the Polish government have contained the outbreak of COVID-19 to a great extent, in line with its peers in Central Europe. The currently recorded 75 cases per 100.000 inhabitants in Poland is low compared to the levels in Western Europe, however, the CE average is currently at 59 (as of June 12). That said, the figure in Poland is rising at a greater pace than the figure in the rest of Central Europe since the daily new infections have not started to decline yet. Instead it has been plateauing at an average between 300 and 400 newly confirmed cases a day since the beginning of April, while last week brought an increase to a new record high at almost 600. This is largely due to regional disparities in the success of combatting the pandemic, mainly owing to a regional cluster in the mining region Śląskie (50% of new daily cases in Poland in the last 7 days). As the number of new daily cases stopped rising, a plan of gradual easing of restrictions was launched on April 20th. The process was implemented in several steps, in line with strategies adopted by neighbouring countries. Worryingly, the time differential between the loosening of restrictions and the most recent spikes in cases outside of this region seemingly coincides with the 12 to 14 days incubation period of COVID-19, although this can of course be coincidental.

Easing of restrictions creating a challenge? 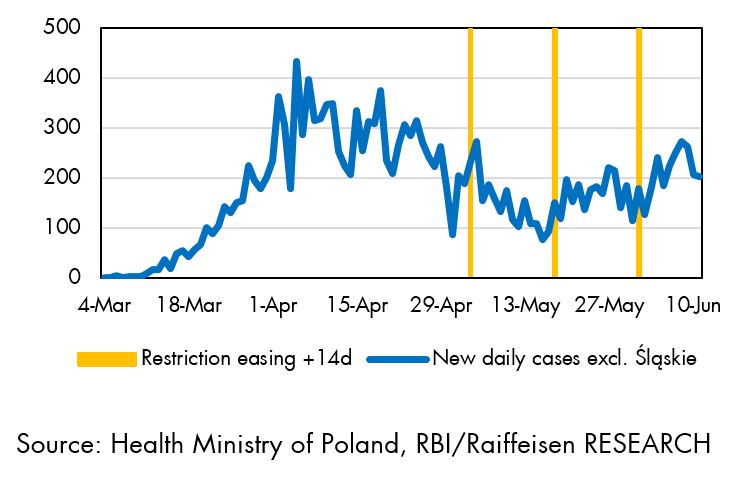 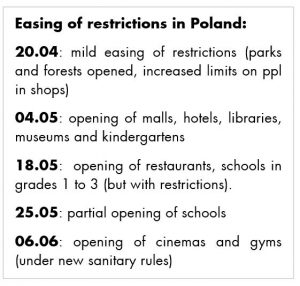 While Poland is at risk of becoming a less positive example in terms of fighting the pandemic, in economic terms it continues to stand out on the upside. Although it is now purely historical, it is worth noting that in Q1 the impact of global economic slowdown was still relatively mild in Poland and even with restrictions imposed in mid-March the economy managed to grow by 2% yoy – similar to Hungary but much better than Czechia (-2.2%) and Slovakia (-3.9%). This is partly the result of strong domestic demand as well as lower trade ties and openness of the economy compared to Czechia and Slovakia.

However, while Poland was named a “green island” during the global financial crisis as it was able to avoid recession, this time it will not manage to repeat this success. Previous crises were largely external and had limited impact on the domestic situation while this time the restrictions to fight the pandemic affected heavily both the domestic demand and supply. With the restriction easing now largely done and services having resumed under new sanitary rules, the prolonging of “flattening the (COVID-19) curve” increases risks to the downside in terms of the impact of the pandemic on the economy. The recent rise in new daily cases puts the government in a difficult position in terms of considerations of renewed restrictions which would again dampen economic activity. It would also add pressure to provide additional support on top of the already sizeable fiscal package introduced by the government. The total size of over PLN 300bn (nearly 14% of GDP) includes up to 7.5% of GDP of direct support which is more than governments in other CE countries have allocated (Czechia: 3.9% of direct support, Hungary: 3%). Direct help ranges from wage subsidies, direct cash transfers to self-employed to non-refundable subsidies to micro and SME firms. The latter are a component of the mostly praised package of the Polish government called the “financial shield” worth PLN 100bn (out of which half has already been released to firms).

The smoothly implemented fiscal package is likely to dampen the negative effect of pandemic on economic activity and employment. However, it will not prevent a significant increase of the unemployment rate from this year’s low of 5.4% recorded in March. Even an increase towards 10% seems likely given the number of self-employed (3mn out of 16.4mn employed in total in Q1) as well as temporary workers (2.5mn). To some extent the negative impact may be dampened by the significant share of foreign workers who left Poland as restrictions were imposed. Just like their inflow balanced the situation on the market in times of shortage of supply of labour, this time their departure may leave some room for domestic workers, although this will likely impact only selected branches (including the most hit services sector). Initial estimates of the Central Statistical Office of Poland, however, suggest this effect may not be large. It is estimated 223 thousand foreign workers left Poland in March and April (160 thousand from Ukraine) – roughly 10% of the 2.1mn foreign workers registered in Poland as of December 2019. The increased uncertainty on the labour market combined with the unknown development of the pandemic itself is likely to continue to dampen demand in the next months. This suggests a very gradual recovery, after a heavy hit to economy, especially in April (industrial output dropped by 24.6% yoy, retail sales by 22.9% yoy). Indeed, as we await the monthly economic data for May, the confidence indices remain dampened. According to data published by the European Commission sentiment improved in all CEE countries covered in the survey, apart from Poland where the deteriorated confidence in the services sector weighed further on the whole index. 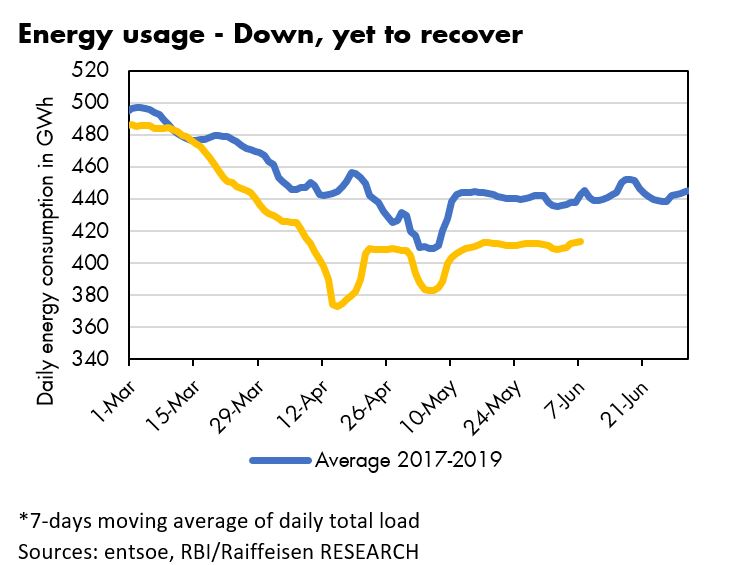 Meanwhile, amongst other high frequency indicators, mobility data from Apple and Google suggests that Poland is mostly aligned with its neighbours in the region and seems to be gradually recovering from the initial decline. However, as the country approaches more normal levels of mobility the recovery seemingly loses speed. Currently the level of mobility is down by about -5% as compared to the pre-COVID-19 baseline levels – from a minimum of around -55% in April, not taking the holidays into account. Further, the energy usage is currently down as well, by about -6% as compared to the average in the time period 2017-2019 (more than the -9% CE-average), however there are no clear signs of a recovery in this regard. Since the middle of March, the 7-day moving average of daily GWh-usage has remained relatively stable between the bandwidth of -5 and -9% below the average level of the previous years, only dipping further below due to the Easter-holidays. A different picture is revealed by the online searches for cars and tourism. The online searches for the 8 most popular car brands in Poland have recently reached a level similar to the average between 2017 and 2019, after being down by about -45% at the end of March. Tourism related queries, such as searches for the most popular booking platforms, are still down by -38% compared to their usual levels at this time of the year, but have recovered greatly from their lowest level, which was around -85% when compared to the previous years. The amount of flights, however, is still down by around -89% and shows no clear signs of recovery. This suggests that some parts of consumption/the economy are starting to recover but given the slow pace of rebound and the hit in April our Q2 forecast of GDP drop by over 10% yoy remains a realistic estimate.

Apart from short term challenges with fighting the pandemic and its impact on the economy, Poland and other countries in the region face long-term risks, but also some opportunities. One of the challenges will be the reduction of drastically increased fiscal deficits following the large anti-crisis stimulus (in Poland it may drive the 2020 deficit to over 11% of GDP, in Slovakia nearly 10%, between 6-7% in Czechia and Hungary). Some pressure here may be lifted owing to the recently announced EU Recovery Instrument which would provide funds starting from 2021 and could be especially favourable for Poland: initial allocation indicated by the EU implies it may receive even EUR 64.5bn (8.6% of the total amount), which would put Poland as the 4th largest beneficiary of the scheme.

In the long term the impact of the pandemic on the labour market, just like in other CE countries will likely disrupt the earlier path to permanent increase in wages to which governments were striving for in the last years (in the case of Poland the plan was amplified by a 3-year plan of annual 15% minimum wage increases). Instead it will now be replaced by efforts to limit the decrease in employment. On the positive side it will probably also add pressure on the digitalization process which has already been gathering pace in the region. This includes the public sector shift like the introduction of system for citizen contact with public administration in Poland (ePUAP) which in 2020 was used by 6.2 out of 38.4mn citizens thus improving administrative processes during the pandemic. While the region still lags behind Western Europe in terms of digitalization (measured by the DESI Index) it has accelerated its efforts in the transformation with Czechia approving a strategy known as Digital Czech Republic in 2018 and Slovakia being 2018 CE leader in innovation according to EBRD (more in our previous article here). The pandemic and global shift towards the online world will only accelerate these changes, both in the public and private sector. The latter already admits that digitalization proved the right strategy when faced with pandemic. Both a survey in Poland (from PIE) and in Czechia (from ABSL) revealed that firms which invested in digital transformation managed through the pandemic significantly better as they were able to shift smoothly to work from home. This is especially true for the business services sector which is rapidly growing in CE and can cope with challenges of pandemic much easier than the manufacturing sector. However also the latter is being deeply reconstructed in order to automate and robotize production. As the transformation continues the whole region will be better equipped for the increasingly likely reinventing of the global supply chains.

Dorota Strauch, CFA is Head of Research for Poland at Raiffeisen Bank International Branch in Poland.