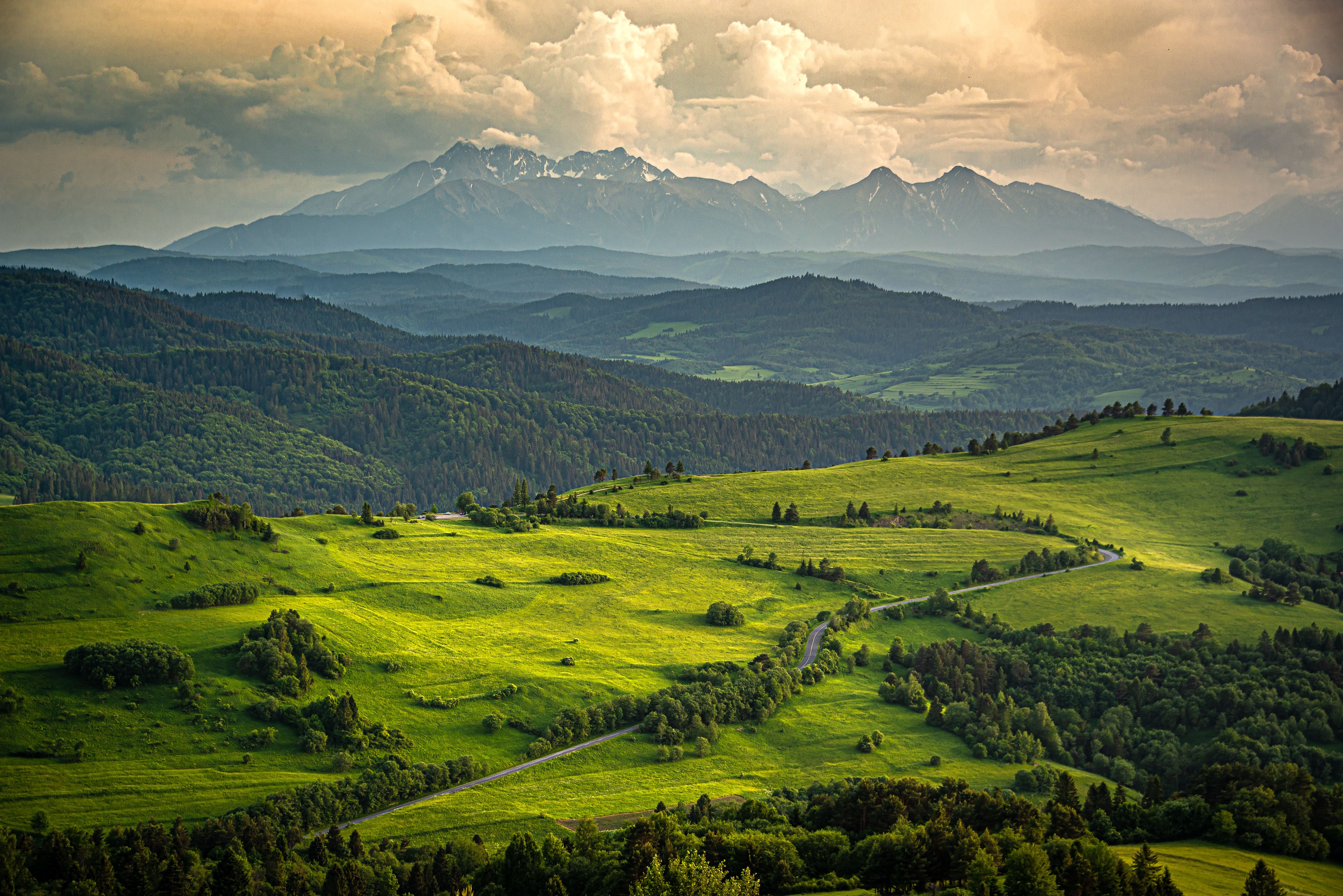 During times where the Corona situation is ever so present – and new corona cases are steadily increasing again – you might not want to travel abroad but rather stay at home and enjoy the beauty of your own home country.

Together with our colleagues from Bosnia-Herzegovina, Serbia, Romania and Slovakia we’ve prepared a little piece on places to visit. Be a tourist in your own country and go see the following beautiful places. 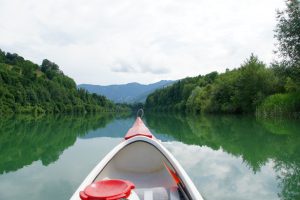 Very often, we travel abroad to discover the beauty of other countries, their sights, their cultures and their special places. We choose to experience great adventures in other countries but what if the great adventures lie in front of your door? Have you ever thought of river hiking with a boat? From the pretty Lake Hallstatt along the river Traun until you reach the Danube – you can easily rent a boat or canoe and enjoy the scenery around you. So much for an adventure at home this year – beautiful scenery, sports and adventure. Check out this video see for yourself. The video is in German, but you will get a good impression nevertheless.

If you haven’t already visited the old bridge in the city of Mostar yet, this is the time. Mostar, the city situated in the southern part of Bosnia and Herzegovina, is one of the most frequented attractions for both domestic and foreign visitors. Given its outstanding natural beauty, architecture and, of course, its famous UNESCO World Heritage Site, the “Stari Most” – the Old Bridge, Mostar is a well-known place even beyond Bosnian borders. 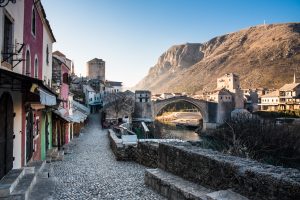 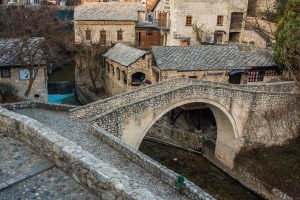 Key activities of life in Mostar usually revolve in its old town, full of quintessential Ottoman architecture, surrounding its masterpiece of Stari Most crossing the beautiful Neretva river, with plenty of traditional restaurants and other historic buildings. An absolute must in Mostar is bridge diving, which – for the past three years – usually took place during the summer months and involves trained professionals diving from the top of the Stari Most into the turquoise water of Neretva river to entertain the crowds gathered at the shores. The distance between the top of the bridge and the river below is about 20 meters, so it must only be undertaken by professionals or by tourists who have taken a training class before. This year, due to Covid-19, the event has been cancelled.

Located between Sarajevo and Dubrovnik, Mostar is a perfect choice for a short trip, which should also include a visit to the near standing Kravice waterfalls, the Marian shrine of Međugorje and Blagaj with its’ Dervish House.

Do you want to walk in the shoes of the Roman emperors? You don’t have to travel to Rome for this – stay at home and explore beautiful Serbia. Situated at the eastern border of the former Roman empire, Serbia was once an important site in this vast realm. Sixteen Roman emperors were born on Serbian soil and the country boasts as many as seven important sites from the north to south. 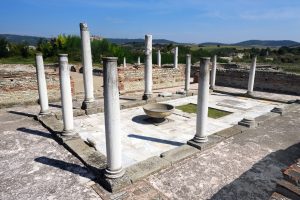 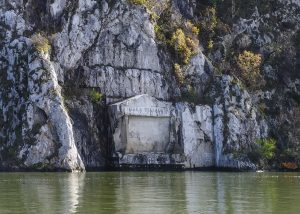 There sure is a lot to go visit in this beautiful country. And maybe – staying at home due to Corona – you would like to explore your home country a bit more. How about walking the Via Transilvanica? 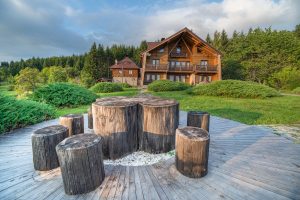 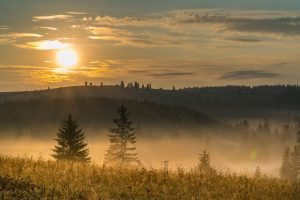 It is a 1,000 km long path across Romania started by Tasuleasa Social, an NGO with more than 20 years of experience in environmental protection programs. The road crosses Romania from North East (in Bucovina) to South East (at Drobeta Turnu Severin) and has now more than 680 kilometers marked with andesite milestones and is open for travelers. It is trekking friendly, but it can also be done by bicycle (however, some parts need MTB training and equipment) as well as horseback riding. Raiffeisen Bank has been a partner of the project since the beginning, as it brings in economic opportunities for the local communities but also showcases the variety of the historical and natural heritage of Romania. The idea of via Transilvanica is to honor the centennial of the Great Romanian Union, encouraging as many people as possible to get to know their country step by step.

If you are in the Banská Štiavnica region for a few hours or a few days, don’t miss a walk through the Štiavnica centre, a visit to Marína House or the Calvary. You won’t see anything like it anywhere else. 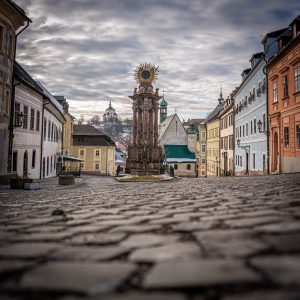 Banská Štiavnica is a picturesque and photogenic town. There are churches, palaces of rich miners and town houses standing in the narrow valley, with small mining houses nestled in the hills above them. And they are all inter-linked by romantic little streets and paths with hundreds of stairs.

Visit this special museum that is home to a love poem that holds its own world record. Marína House is the epicentre of love in Banská Štiavnica. Here you’ll find an exhibition dedicated to the longest love poem in the world – a title officially recognised by the World Record Academy.

The poem was written in 1846 by national poet Andrej Sládkovič. It was dedicated to his love, Marína Pischlová, who lived in this house. The exhibition that is now here uses modern talking pictures to take you into their true love story and explain why this flaming passion was not ultimately happily fulfilled. In Sládkovič’s library, you will experience the feeling of bathing in love and beauty. And if you are lucky enough you will have the opportunity to peek into Marína’s bedroom.

Marína House also now hosts the Love Archives, where you can add your own verses. The archives have space for 100,000 love stories and, when it is full, it will be the place with the highest concentration of love in the world.

Štiavnica’s Calvary is one of the most beautiful Baroque Calvaries in Europe. It is located on the hill Scharffenberg and is visible from all sides. From there, there is an unrestricted view of Štiavnica’s caldera (a large crater which came about by the collapsing walls of a volcanic crater). The Calvary is remarkable due to its number of stations and the story it tells.

Construction began in 1745 and was finished in 1751. Most Calvaries have fourteen stations, beginning with the condemnation of Christ before Pilate and ending with the Holy Sepulchre. The Štiavnica Calvary has seventeen stations, three churches (Dolný kostol (Lower Church), Sväté schody (Holy Stairway), and Horný kostol (Upper Church), the Prison (Ecce homo) station, and the Holy Sepulchre – the only building located on the opposite, eastern side of the hill. Wooden reliefs in the chapels represent, with typical Baroque theatricality, key moments of Jesus’ life until his torture and resurrection.

The uniqueness of the Calvary, along with its sensitive setting in a place with a beautiful view, make it one of the most visited attractions. The Calvary is open throughout the year at the weekend, while in the summer season the churches and chapels are open daily. 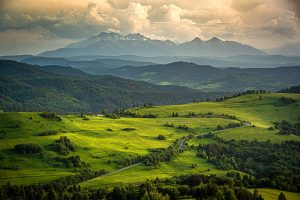 Charming, but much of it forbidden! The popular ridge hike along the peaks of Belianske Tatras has been closed to the public since the 1970s due to nature conservation. Still, one trail allows visitors to enjoy the beauty of the Belianske Tatras up close.

In 1991, the Belianske Tatras were declared a national nature reserve, protecting this extensive area, which from a nature conservation point of view, is unparalleled in its diversity of flora, extremely impressive and attractive landscape, and favourable living conditions for animals. It was first discovered by shepherds many years ago and later, poachers came to the area for chamois and marmots. Gold diggers and gold panners also tried their luck. Most famously, treasure hunters appeared, especially around the caves.

A change came in 1978, when there was a significant alteration in the network of marked trails in the area. The red-marked Magistrala trail was removed due to nature and environmental protection. It ran across the ridge of the Belianske Tatras, which then became completely inaccessible to tourists. This situation remained until the early 1990s, when a trail was opened from Monkova dolina (Monkova valley) to Kopské sedlo (Kopské pass).

The trail is not technically difficult but compares both physically and mentally to hikes in the High Tatras. The overall elevation gain between the lowest and highest points is 900 metres. The trail is six kilometres long and can be completed in three to four hours, depending on your physical fitness. The educational trail has six stops. At the fifth stop at Široké sedlo (Široké pass) tourists can enjoy the beautiful view of both the High Tatras and Belianske Tatras. If visibility is good, you can see further into Slovakia’s interior.