What was initially more a ‘Chinese problem’ and then an ‘Italian drama’ has rapidly transformed into ‘everybody’s problem’. Hungarian authorities – alongside with other CEE governments – were moving in an early stage to announce social distancing. The first COVID-19 case was identified on 4 March, schools closed from 16 March on and a soft lockdown proclaimed on 28 March. Up to now identified cases are still below 80 per 1 million inhabitants (6 April) – compared to 2200-2900 in Italy or Spain, 1200-1400 in Austria or Germany and 200-400 in Croatia, Romania, Serbia or Czechia. While the curve is quite flat so far, the peak might be still ahead. Accordingly, the lockdown in Hungary is likely to stay for weeks – if not months.

Exports and weak forint are no lifeline

While governments are struggling to contain the spread of the virus, the attention is focussing on the economic damage as well. Supply and demand shocks are unfolding simultaneously, gains on the health front go along with gigantic economic damage. In light of the high share of services directly impacted by the crisis in Hungary (tourism, transport and logistics, film industry, etc.) and the significant exposure of the export-sector to cyclical and highly integrated industries (automotive, electronics), Hungary definitely goes to the group of countries which are severely impacted by the unfolding recession in Europe. In fact, Hungary’s high level of openness (export accounts for 100% of GDP) contributes to the deepening of the crisis. As opposed to previous crisis, importing demand from abroad – especially in combination with a weak HUF exchange rate – is no viable option. Demand drops everywhere. Therefore, Hungary’s extensive and competitive export sector is not of an advantage at present. In this respect, Hungary cannot easily profit from massive stimulus programs abroad (such as Germany), at least in the short-term (like in the Global Financial Crisis, but only from a mid-term perspective (28% of Hungarian export goes to Germany).

According to the Hungarian government since beginning of April, every day 4,000 people lose their jobs. This equals a 0,1% job demolition (in relation of total employment) on a single day. At an uninterrupted speed, that would translate into almost 3% loss of total employment in one month. However, due to the multifaceted contagion of the economic damages (i.e. frictions at one company are multiplied through suppliers and business partners) the situation is likely to worsen rapidly in the coming weeks. Therefore, by the end of the year the unemployment rate could inch close to the 6% level (with earlier peaks at around 6.5%), up from 3.4% end of 2019. Uniform policies in disaster relief – some specialities in case of Hungary

Eventually the economic damage is a function of the duration of lockdowns, the extent of reduced demand and the magnitude of fiscal and monetary policy support – although expansionary support measures can only take hold once restrictions to the daily life are lifted. By and large the Hungarian government is using the “standard toolkit” to counterbalance this crisis, e.g. (1) extending liquidity and providing credit guarantees to the corporate sector; (2) offering deferral of tax payments; (3) sending direct money transfers to most vulnerable persons; and (4) establishing wage subsidies (e.g. short-time working schemes).

While the first support package in Hungary (tax cuts for most exposed sectors/businesses, loan-repayment moratorium until year-end, foreclosure moratorium, lengthening certain social transfer pay-out periods etc.) came quickly (18 March), that package was incomplete. That said the most recent second package (6-7 April) contains the missing items. The government announced wage subsidies (70% of wages – for 3 months and with a cap – are to be paid by the state to companies whose output will fall by more than 15%), offered more tax deferrals, provided investment subsidies, pays extra cash to health workers, spends HUF 600 bn (1.3% GDP) on tourism industry, and re-introduced the 13th month pension (gradually, starting from 2021 January), promised preferential loans and state guarantees. The direct fiscal package is modest though and runs little above 2% of GDP. Having run pro-cyclical loose fiscal policies over the past three years and with a public debt-to-GDP ratio at 66% (end of 2019), the government has limited room to manoeuvre. Therefore, it comes not totally surprising that the recent package also includes – once again – some sectoral taxes: HUF 55 bn (0.12% of GDP) extra tax set on banks, and HUF 36 bn (0.08% of GDP) on retail chains. As we interpret all the measures the overall economic support in Hungary round up to 18-20% of GDP. This scale seems reasonable in comparison with other small and open economies in the region. At the EU level national anti-crisis measures are currently estimated at 16% of GDP. 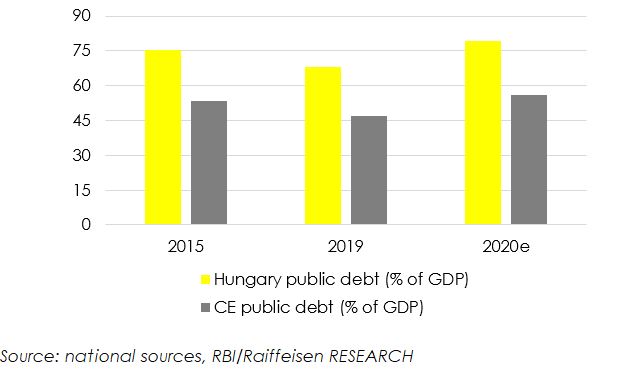 Additionally, the Hungarian Central Bank (MNB) decided to increase banking sector liquidity, to re-launch the Funding for Lending scheme (HUF 1000 bn, all-purpose loans with maximum 20-year maturity) and introduced the well-known quantitative easing (QE) – government bond purchases in the secondary market (details unknown yet). Having experienced a tangible HUF weakening (12% against vs the EUR since Jan 2020), which provides limited countercyclical stimulus in current circumstances, MNB also decided to hike interest rates. First in an unconventional manner then on 7 April in an orthodox way. The sum of the actual rate hikes is around 120-140 basis points, possibly sufficient to support the HUF. On a positive note, a more normal interest rate landscape shall be beneficial for banks that have to shoulder an extra-taxation – as mentioned previously.

Past bank profits not to be extrapolated

To put things into perspective: The annual banking sector profit pool in Hungary stood at around 1.5% of GDP in recent years (posting new all-time records in nominal terms). Return on Equity readings came close to the 15-20% level. Therefore, there is some room to digest the extra-taxation at 0.12% of GDP for the time being. Moreover, one has to confess that on an aggregated level the record-profits from 2016-2019 compensated for brutal losses seen in 2011, 2012 and 2014. However, banks on the Hungarian market profited from substantial one-offs in recent years that cannot be easily repeated in a brutal downturn. Moreover, this time (foreign) banks in Hungary are not at the heart of the problems but are possibly part of the solution.

In this context leading Austrian CEE banks continue to play a vital role in Hungary having a combined market share above 10%. Moreover, according to international banking statistics, Austria accounts for around 32% of exposures to Hungary. Here Austria is the main creditor ahead of Italy, Belgium and well ahead of Germany. Although balance sheet exposures had been reduced in absolute amounts compared to the state of overleverage in the Hungarian economy back in 2008, in relative terms Austrian banks gained in importance since then. Their share in international exposures towards Hungary increased from some 24% back in 2008 to 32% as of 2019. In this respect, major Austrian CEE banks, but also other Austrian mid-sized or smaller banks, clearly see the neighbouring country as extended home market. 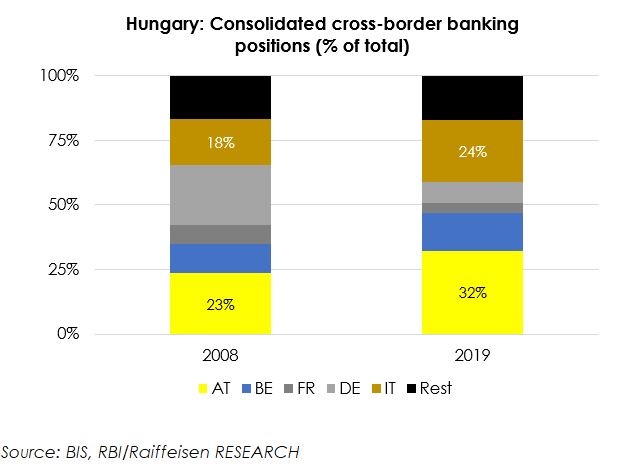 Although the near-term outlook for the economy and some sectors seems to be clouded, there are plenty of strengths in the Hungarian economy. These include the healthy fundamentals (no serious macro imbalances), a healthy banking sector (low loan-to-deposit ratio, low indebtedness, no household FX loans) and the domestic demand-led high economic growth of previous years combined with a low unemployment rate. Hungary has also a nice comparative cost advantage, and together with the whole Central European (CE) region – including Austria –- it may benefit from “shortening the supply chain” strategies in Europe going forward. That said, Hungary is a key export destination for Austria. With an export share of 3.7% (goods, 2019), Hungary is not only Austria’s sixth most important trading partner, but also the most important export market in CEE, ahead of the Czech Republic. Austrian exports to Hungary, which slumped by 1/3 in 2009 in the wake of the particularly severe recession back then were able to recover quickly. Thanks to dynamic growth in exports to the neighbouring country (2015-19: Ø 5.6% yoy, total Austrian exports: Ø 3.8% yoy), it was thus possible to increase the share of exports to Hungary in total Austrian exports from 3.0% in 2012 to 3.7% in 2019. The outstanding importance of Hungary for the Austrian economy becomes even more evident when looking at FDI. After the fall of the Iron Curtain, Austrian companies continued to choose Hungary as “starting point” for their CEE expansion. Hungary’s share in total Austrian CE FDI stood at 82% in 1991; almost 18% of total (!) Austrian FDI were located in Hungary in 1993. After this first FDI wave there was an increasing diversification of Austrian FDI. During the Global Financial Crisis, Austrian companies maintained their investments in Hungary, but a slight decline in their investment volumes can be observed from 2015 (2015: EUR 7.3 bn, 2019: EUR 6.1 bn) onwards, which may also reflect below-average profitability of Hungarian FDI since 2008. As a result, only 3% of total Austrian FDI was located in Hungary end of 2019. The neighbouring country has thus fallen somewhat behind, as Austrian companies expanded their presence in most other CE countries, especially in the Czech Republic, which now accounts for just under 40% of Austria’s CE FDI, while Hungary now accounts for only 18% of FDI in the region (roughly on a par with Poland and Slovakia).  The sketched trend in Austrian FDI is not per se a (home) country specific one. In terms of net FDI Hungary underperformed the CE average and peers by a small margin over the past 5-6 years.

There might be a lot of short-term and long-term drivers for this not so impressive FDI performance. However, a minor impact of political factors might be considered as well. That said most recent emergency legislation, introducing the state of emergency, aiming at combatting COVID-19 but granting enormous powers to the government has been heavily criticized by some observers domestically and abroad. As the bill has no expiration clause the government itself has the power to end the state of emergency. Doing this at a meaningful time will also be important to ensure investor confidence in the country and the confidence among domestic economic actors – which remain calm for the time being. Not to forget that otherwise there is a risk of too many serious skirmishes between the Hungarian government and the EU/EU institutions. Economic actors also expect that re-introduced sectoral taxes are lifted quickly once the recovery kicks in in 2021.