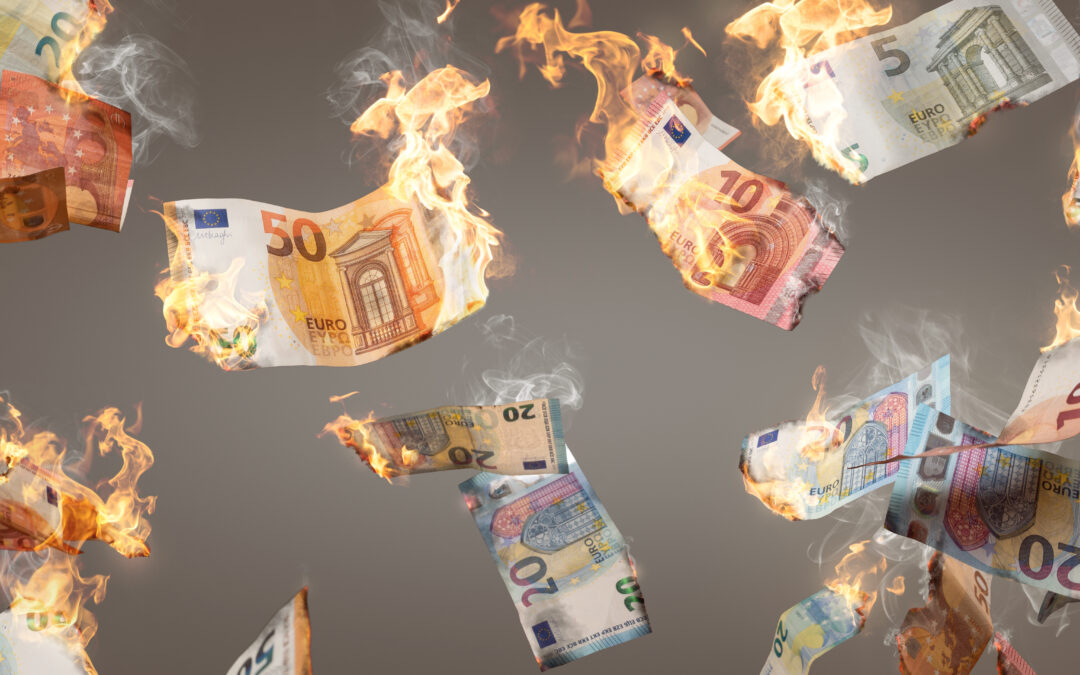 With inflation still trending upwards and ongoing price pressures stemming from the war in Ukraine, central banks in the CEE region are facing a tricky balancing act. On the one hand, the inflation beast needs to be tamed, on the other the growth outlook has deteriorated, reducing the room for further rate hikes. Since the start of the hiking cycle, central banks in Central Europe have been particularly decisive in their mandate to combat inflation, meanwhile SEE is slowly following suit. However, not just economic indicators, but also political headwinds may soon add to uncertainty about the monetary policy outlook for the region. Stagflation risks in CE are elevated, whereas SEE (except Romania) is generally less exposed.

Upside risks to inflation and rates not receding

Despite increasing risks also on the side of economic growth, we remain in a stream of upward revisions and upside risks both for inflation and for interest rates in Central Europe and Romania. In some countries, average double-digit inflation is likely to be reached in 2022. Moreover, following another series of higher than expected CPI readings and with the priority of central banks to tame inflation (expectations), we again revised our target key rates for Czechia, Poland and Romania. We now expect key rates to reach the peaks at 6.5%, 7% and 7% respectively implying further hikes of 75bp in Czechia, 175bp in Poland and as much as 325bp more in Romania (current key rate levels in those countries at 5.75%, 5.25% and 3.75%). We have also lifted our expectation for the key rate in Hungary following recent communication from the central bank that on the one hand it may tighten policy at a slower pace going forward but on the other that Hungary should reach positive real rates. In our understanding this means that the rate hike cycle is going to be lengthier, and the terminal rate will be higher than we previously assumed. Accordingly, we have revised our interest rate forecast: we expect the cycle to peak at 8.4% (vs. our earlier 7.4% forecast) and the rate hike cycle to end only at the end of Q4 (vs. Q3). 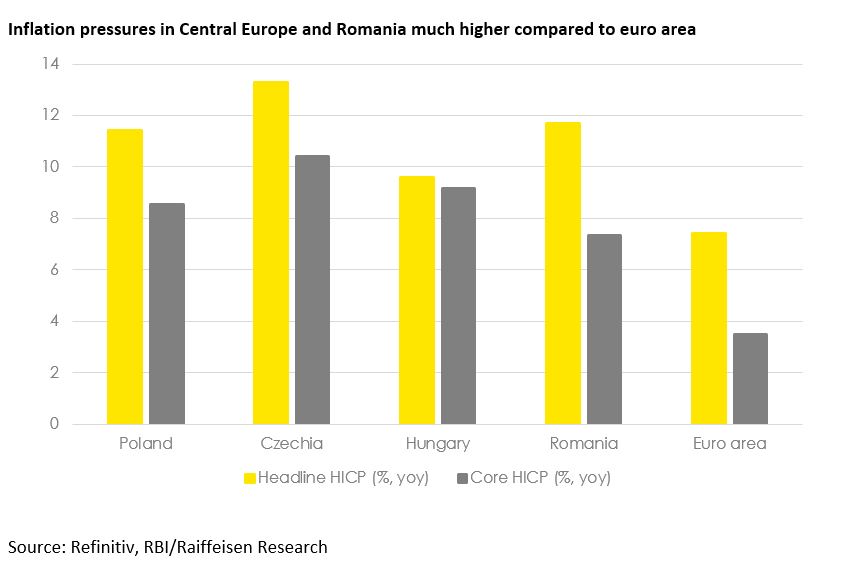 As a reminder, the pre-pandemic rate level had been at 1% to 2.5% in those four countries. On top of the regional inflationary pressure, the outlook for bold monetary tightening in the US and the euro area (where we expect also 3 hikes now in 2022, starting in July) is adding to pressure on CE/SEE central banks. Not to forget the intra-regional competition for higher rates in order to avoid too aggressive FX market swings. Overall, we are currently seeing the average key rate across the markets covered here to inch close to or above 7% in the course of 2022, while our previous call (before the war in Ukraine) had been for an average (terminal) key rate level slightly above 4% in major CE/SEE markets (our average CPI call for the CE/SEE region was revised up from 6-7% prior to the Ukraine war to 9-10% currently). 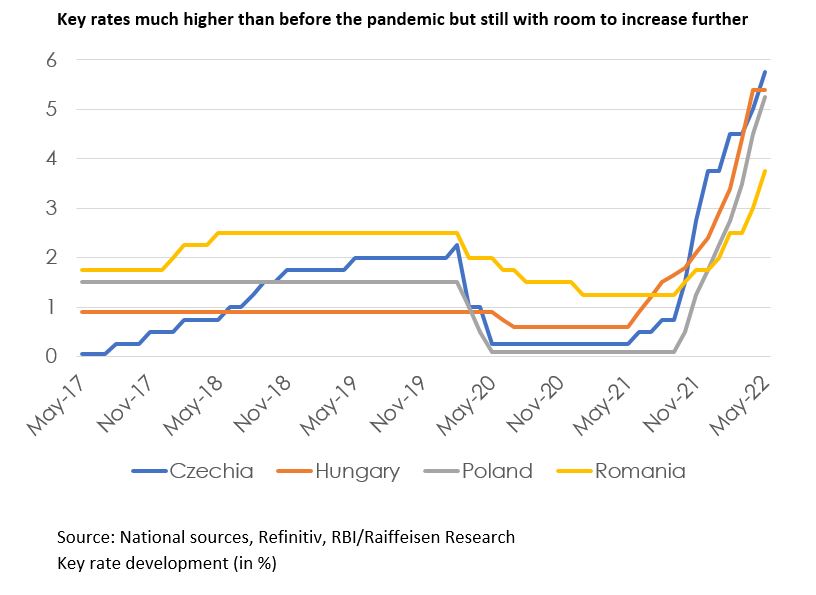 That said, terminal rates in the CE/SEE region could be reached in 2022 (from a fundamental point of view), while political headwinds are possibly on the rise as well. Some changes may be in sight for the central bank so far seen as the role model for the rest of the CEE region (or even beyond it): the appointment of a new Governor of the Czech National Bank (CNB) may result in a dovish shift of the so far most hawkish central bank in the region. Meanwhile, in Poland, A. Glapiński has been approved for a second term which leaves the NBP with a policy marked in the past by some unexpected turns. That said, particularly the changes in the CNB leadership are possibly an example that on top of local factors (political) headwinds to high rates and/or the high de facto costs of the Ukraine war (in terms of elevated inflation and energy prices) shall not be underestimated in the CE/SEE region. Not to forget about risks from (absence of) monetary and fiscal policy coordination, e.g. in case of Poland, where we expect the highest regional inflation rate also in 2023 (with Parliamentary elections additionally complicating the policy mix).

Finally, while inflationary pressures and risks remain the highest in Central Europe, in SEE Romania faces similar challenges (so far not shared by other countries in the region). With the central bank so far significantly lagging in terms of pace of tightening compared to CE, we expect this to be corrected in the next months as both NBR and our forecasts have had to be revised significantly upwards in case of inflation and thus leading us to incorporate sizeable further monetary tightening for the next quarters.

Stagflation Risks – is the genie out of the bottle?

Stagflation – an economic environment with sustained rising or above-average inflation rates and either no or marginal real growth in the production of goods and services– is generally considered to be the worst of both worlds in economics, and thus a scenario that is strongly feared. Since its last occurrence in the 1970’s such a scenario usually seemed far away but given the sequential supply shocks of the pandemic and the war in Ukraine, stagflation has now come too close for comfort. Still, stagflation risks are diverging between CE and SEE countries, with South-eastern Europe much less at risk. On the one hand due to the more optimistic inflation dynamics, on the other due to a more optimistic growth outlook. As the strongest impact on growth arising from the war in Ukraine takes place in the industrial sector, growth in the industry-focused Central European countries and Romania is likely to show the strongest slowdown. Whereas the relatively more services oriented SEE countries will be less strongly affected. Q2 2022 will likely be better than the rest of the year, given the still ongoing recovery from the pandemic. Going forward, however, the disruptions to industry stemming from the bottlenecks in (energy) supplies will likely slow growth, especially in the winter of 22-23 (with Poland possibly on the stronger side due to higher diversification of industry, Hungary most vulnerable to energy supply disruptions from Russia and Czechia most integrated and correlated with euro area developments). The reduction of real household disposable incomes, affected both by inflation and the restrictive monetary policy/rising rates, should diminish consumption and thereby growth. The inflow of NGEU funds and possible nearshoring (from diversification of supply chains) will support investments, despite the industrial weakness, and buoy the growth from 2023 onwards. The direct impact on GDP growth in Southeastern European economies is even less pronounced than in CE and the euro area, as most countries (except Bulgaria) have limited economic linkages with Russia and lower dependency on Russian energy imports. For most countries, the strongest (additional) impact will come from a decrease in private consumption, mainly caused by the even higher inflation, but also due to lower growth in the euro area and possibly smaller flows of remittances. However, some countries in the region, those not benefitting from the NGEU funds, might see a reduction in private investments, which are pressured by the high uncertainty. 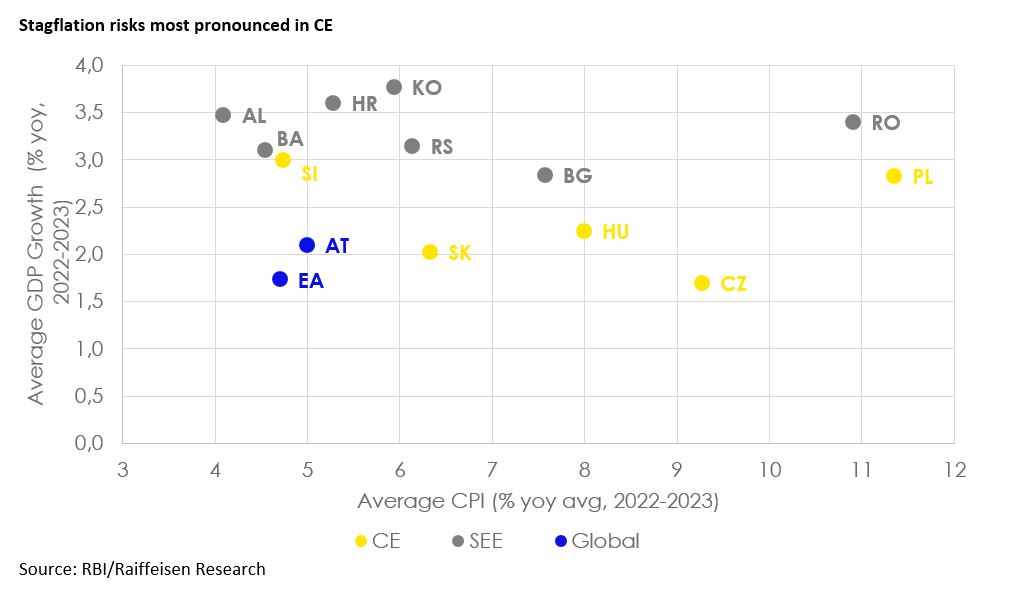 With inflation spiking stronger in CE and Romania and growth moderating significantly, the risk of a stagflation scenario is more elevated here (but varied by country). Nonetheless, we do not believe that a prolonged high inflation scenario is looming for the CE region, as inflationary pressures should decline to more normal levels past 2023 (2-4%) and growth should return potential output growth (2.5-4%) due to external funds and potential near-shoring. With the growth outlook slightly more optimistic and inflationary risks less pronounced, the SEE denotes a more limited stagflation risk. Looking beyond 2023, growth here (3-4.5%) should exceed expected growth within CE as the region is still catching up with the European Union. In line with our expectations for global and euro area inflationary pressures, inflation should moderate from its current level as well. Further, it must be noted that the positive labour dynamics (wage growth and declining unemployment) in CE/SEE still support demand, thereby preventing the lack of demand that is typically associated with stagflation. That said, these positive developments do create additional demand-driven inflationary pressures (on top of multiply supply-side ones). Overall, the stagflation topic likely has a more temporary nature, unless downside risks to growth and upside risks to inflation (particularly for 2023 and beyond) materialise. 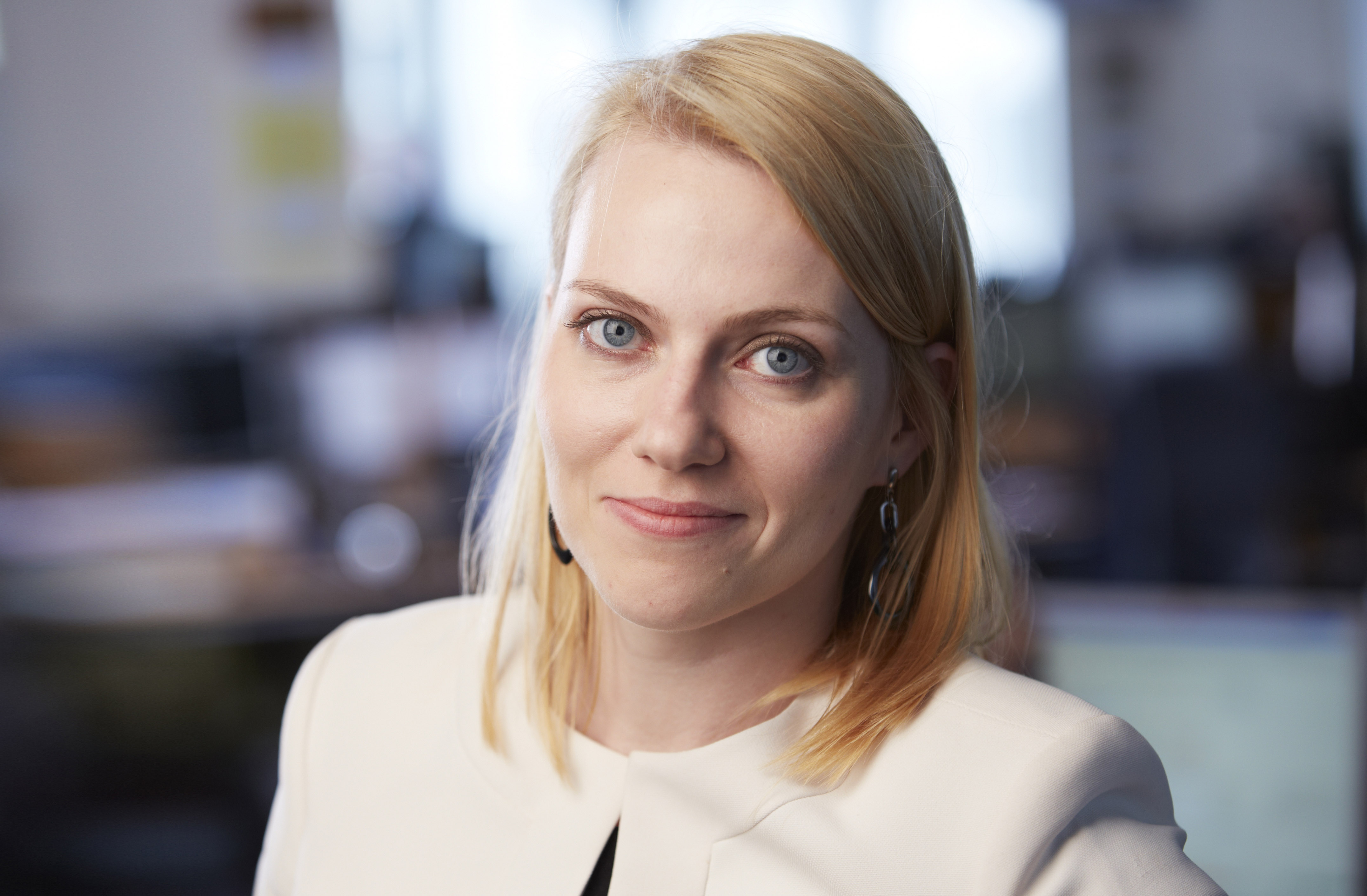 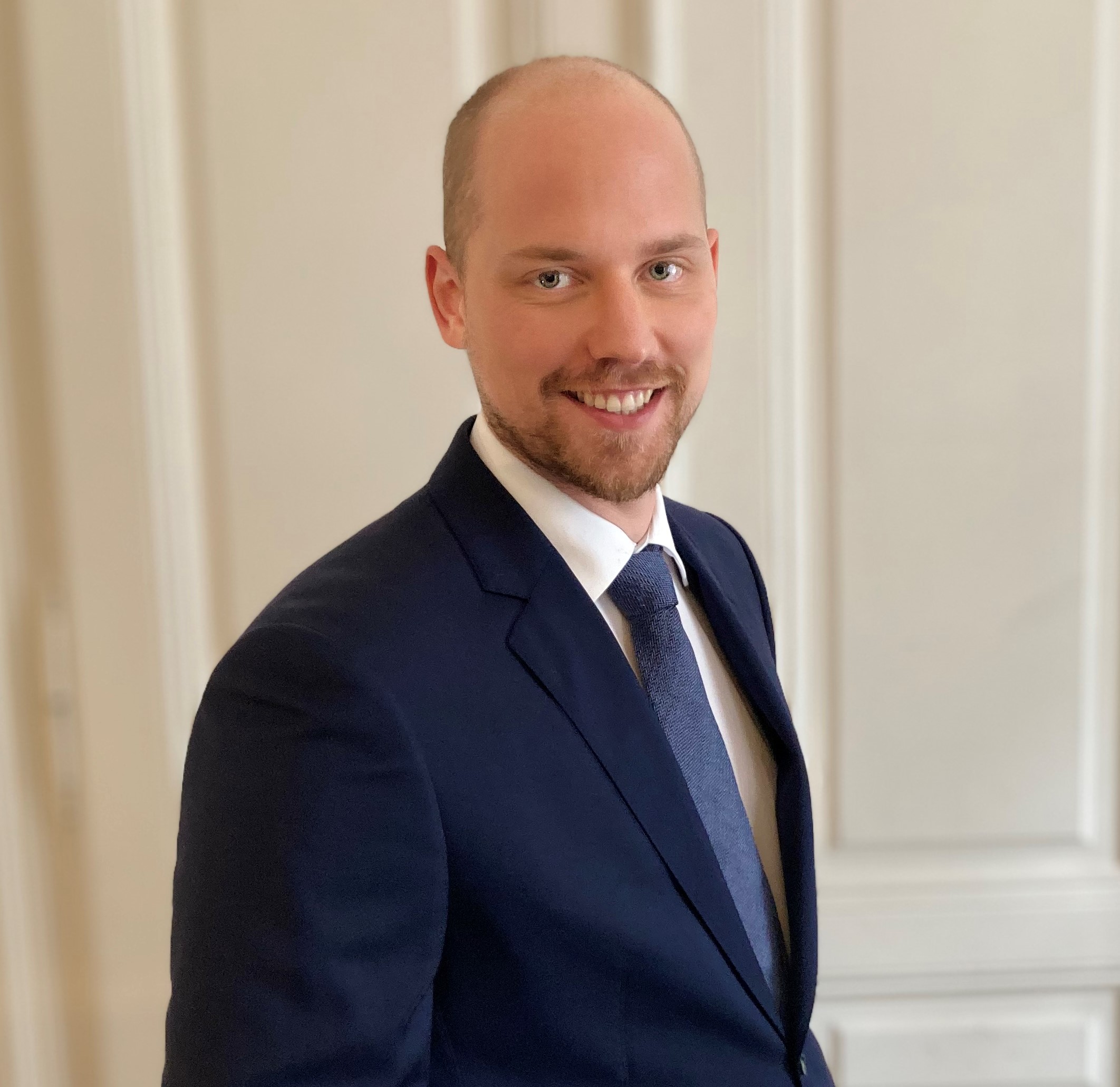 Economic and cultural facts about Russia at a glance

An outlook on Russia’s economy: Financial strength and economic weakness

Digital Croatia? Depends on where you look!