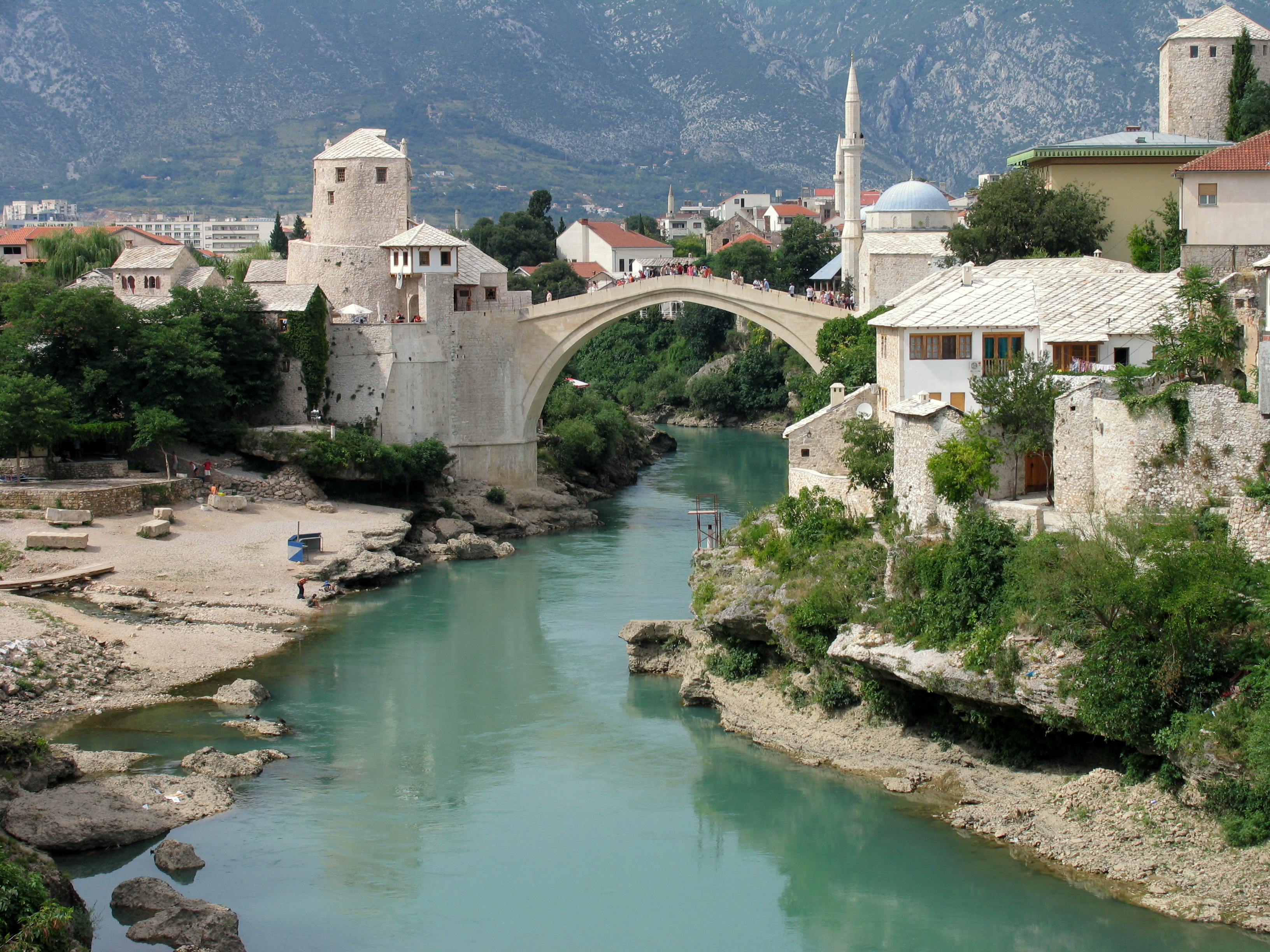 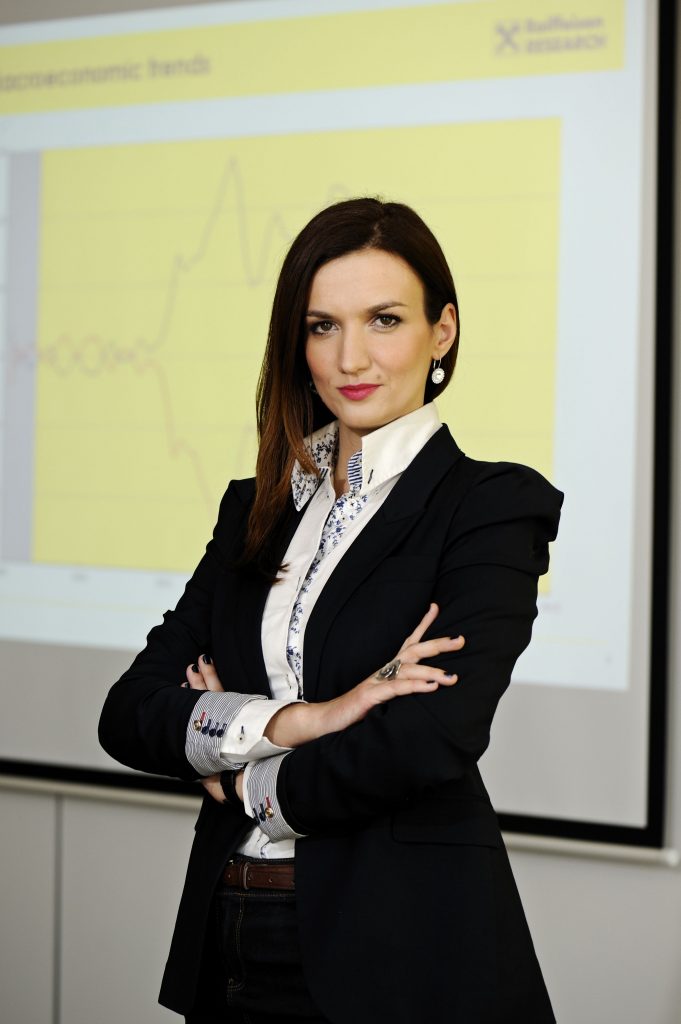 The entire banking system in Bosnia and Herzegovina (with assets in the range of EUR 15-16 billion) roughly corresponds to the balance sheet of a mid-sized regional lender or larger savings/cooperative bank in a Western market like Austria, Germany or Italy. Therefore, the local banking sector is often overlooked in international comparisons and statistics.

Consequently, banking in BiH naturally represents a smaller part of the regional CEE or SEE exposure for international/western banks operating in the region. In the case of consolidated cross-border exposures, for example, Bosnia accounts for 1% or 4% of regional exposures (for CEE and SEE respectively).

However, in the case of BiH, the exposure of international banks is remarkably constant. Relative to peers like Romania, Bulgaria or Croatia no drastic adjustments and restructurings were necessary here – although the banking sector in BiH was characterised by certain consolidation following the Global Financial Crisis (GFC) as well.

For example, the number of banks operating in the country has declined slightly (down from 30 in 2008 to 23 currently). In addition, two years of (moderate) losses were recorded in 2010 and 2013. However, this is not a very intimidating fact in the SEE or regional context as indicated by one to five (heavily) loss-making years in the cases of Croatia (1), Serbia (1), Romania (4) or Slovenia (5) following the GFC. Nor did the number of non-performing loans in Bosnia (with peaks at 15% in 2013) reach the record levels of some other SEE countries with NPLs in the range of 17-20+%. Loans and bank assets were also kept stable in relation to GDP or even increased slightly in recent years, illustrating the large bank centricity and concentration in the country compared to the level of economic development (assets to GDP reached a peak level of 94.4% in 2018). In contrast, we experienced significant declines and adjustments in the other SEE markets like Romania, Bulgaria or Croatia. However, the relative stability of recent years also implies that there is now less turnaround and growth potential than in some other SEE markets due to limited private sector activities and overall modest economic growth in range of 3% GDP on average in real terms over the past four years. 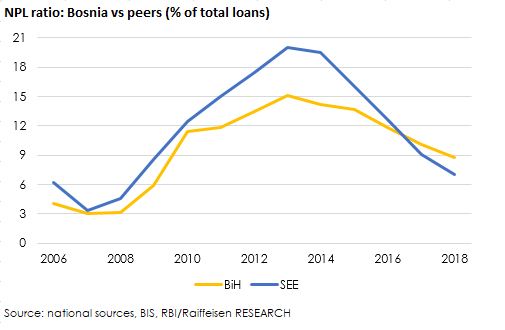 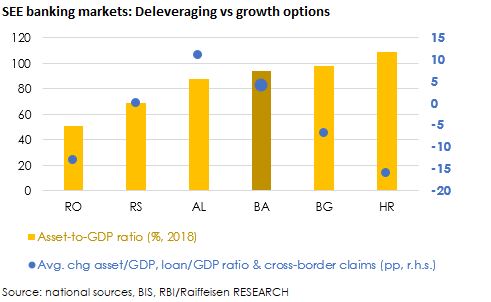 From a structural point of view, further consolidation on a still partially fragmented market seems necessary. With just slightly above 20 banks operating in the country, this indicator is close to the regional average of the SEE markets, although BiH is one of the smallest regional markets. However, the market share of the five largest lenders is already at a considerable level (64-65%), which does not make consolidation any easier.

Nevertheless, there is still room for improvement, at least into the 70%+ range when looking at other smaller markets (such as Albania, Slovenia or Slovakia). In case of further consolidation higher and more sustainable profitability should also be achievable in the long-term. Despite the advantage of lower volatility, the sector on aggregate has hardly been able to achieve a double-digit Return on Equity in recent years (2018 RoE at 9.6%; 2017 RoE 10.2%, which was the record for the last 10-15 years.). Other SEE banking markets have returned to double-digit RoE readings once again. However, leading foreign banks are currently performing well on the BiH market. They have shown that they regularly outperform the market and generated double-digit Return on Equity readings in 2018. The leading foreign banks are expected to be market movers and lead further acquisition and consolidation of the sector in search for larger market shares and better mid-term profitability options. 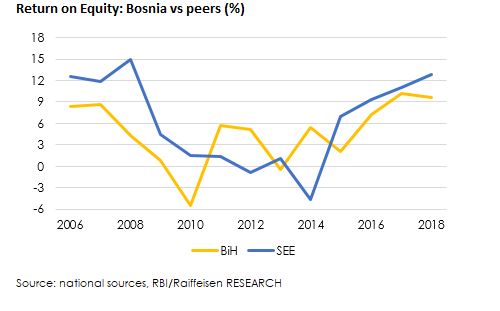 Despite marginal adjustments in recent years, the banking sector continues to show a very high foreign presence (with almost 85% market share held mainly by western European lenders from the euro area), and we expect little change here. A foreign-ownership ratio of 85% is well above all relevant regional peers in CE/SEE, so that Bosnia is de facto already very strongly integrated with the EU/Eurozone. In this respect, it is obvious that a close collaboration between local authorities and European regulatory authorities makes perfectly sense (for example, in the form of technical assistance programmes with EBA, ECB etc.). Full EU membership is still a long way off and only then can BiH really work on formal and close cooperation with the ECB in the fields of banking supervision (like Bulgaria and Croatia are doing currently, which is necessary for joining the euro). This approach and cooperation is strongly supported by the IMF and the EC through several technical assistance projects.

Finding the right balance in currency and sectoral lending structures

Like other SEE countries (Croatia, Serbia, Bulgaria), the local banking sector is characterised by a high degree of euro-isation, with more than one third of total liabilities being deposited in EUR, while loans are placed 99% in local currency (mostly BAM linked with a currency clause to EUR). However, rising confidence in the local currency (or the stability of the currency peg) has been evident in the ten years since the GFC. This development was strongly supported by a high degree of stability in the banking sector as well, where deposits in euros fell from 46% in 2008 to 33% in 2018, thus improving the currency profile and currency match of the banking sector.

In addition, one of the phenomena of the local banking sector is ongoing strong deposit growth, which has surpassed the growth of loan books over the past six years. This development pushed the loan-to-deposit ratio below 90%. We see this development driven by vigorous citizens’ savings backed by a substantive inflow of remittances. One may even say that the banking sector has moved to a stage of moderate over-liquidity and is well positioned to finance further growth. Therefore, it is positive news that loan growth also returned to a healthier area of 4-6% year-on-year, backed mostly by retail consumer loans (70% of retail loans). However, in the years to come the real challenge for banks in BiH will be to define a decent risk appetite, shifting financing more to the private SME sector (including longer-term lending). Here we see the real strength of the economy and such a development should also promote a more vibrant, stable and self-sustaining economy plus a higher speed of convergence.

Ivona Zametica, is Chief Macroeconomic Analyst at Raiffeisen Bank Bosnia and Herzegovina. She is closely monitoring the local banking market.