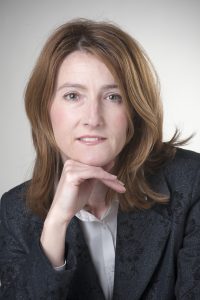 A possible euro area entry of Croatia, and this as quickly as possible, is a double-edged issue. After all, the euro zone is currently also divided into two parts, into countries of the so-called Northern part and the (mostly) southern periphery and not all euro area members are currently equally successful inside the currency bloc. In a narrower geographical sense Croatia is more westerly than a country like Slovakia (that is more part of the core euro area), but also more southern when it comes to certain economic indicators. All in all, in terms of economic and institutional EU and euro area geography Croatia tends to be more in the southern camp. This must be acknowledged, even if there are some theoretical and practical arguments that may also suggest a rather rapid introduction of the euro. First of all, the level of prosperity – as an indicator of real convergence – in Croatia is currently roughly on a par with that of other euro-entry countries from Central and Eastern Europe (at least at the time of their entry into the euro area). In addition, the correlation between the inflation and economic cycle in Croatia and the euro area is quite high. Here, Croatia performs almost as well as Slovakia, the last major Central European country to join the euro. And this industrialized country is certainly regarded as a successful euro accession country. Also, more than 70 percent of Croatia’s foreign trade is with the euro area, while in Slovakia the ratio was only marginally higher at the time of the introduction of the euro. In terms of foreign currency loans (now mostly in euros), the figure in Croatia is around 60 percent; in Slovakia, in the run-up to the introduction of the euro, the figure was only around 20 percent. In this respect, it might be reasonable to assume that the de facto euro member Croatia would soon see itself in the euro area. And here the comparison with Slovakia is instructive – and after all there is the self-conception in Croatia to belong to Central Europe per se, and only erroneously not to have been there in the 2004 EU enlargement round (where the CE countries joined the EU). 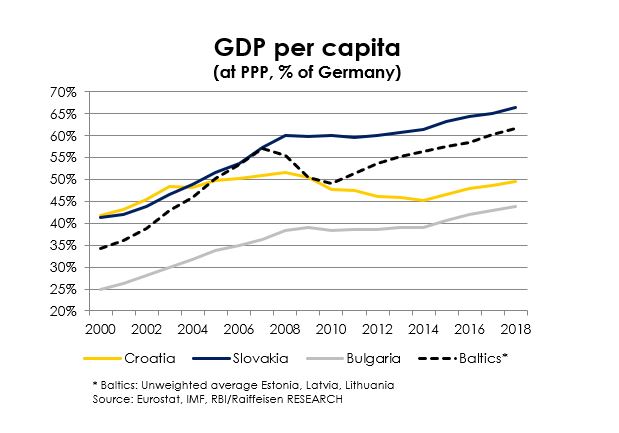 However, efforts have also been made in recent years to rebalance the banking sector and to curb foreign currency lending. Years ago, foreign currency loans still accounted for over 80 percent of loan portfolios in Croatia. The loan-to-deposit ratio inched above the 100 percent level, while external financing was needed to re-finance the banking sector. This had changed in recent years. The banking sector is more localized, although the deposit side is also highly euroized. In this respect, there are no massive risks in the system as a whole that really suggest a rapid “flight” to the euro. Or in other words: some of the efforts of recent years, that also contributed to more local and less external financing, would almost be reversed with a quick euro area entry. In addition, there are many other important practical and political arguments against Croatia’s rapid entry into the euro. In contrast to Slovakia, it must be questioned whether the economic and competitive structures in Croatia really suggest a rapid entry into the euro. The IMF estimates the share of the shadow economy in Croatia at 17-28 percent of GDP. These are values like in Italy or Spain, in Slovakia it is about 8-12 percent. Other competitiveness indicators or indicators of institutional convergence paint a similar picture. In addition, Slovakia fully met all Maastricht criteria when it joined the euro. In the case of Croatia, if it were to join the euro before the mid-2020s, exceptions would probably have to be made to the 60 percent public debt-to-GDP threshold (as in the case of Italy, Greece and Belgium). The public debt-to-GDP ratio may inch to or below the 50 percent level if the consolidation course of recent years is maintained and is not again overturned by external shocks or less stability-oriented economic policies. On the one hand, one could argue in favor of the accused in case of doubt, but on the other hand it should also be noted that among the EU countries, Croatia had to record one of the highest increases in the public debt-to-GDP ratio. Moreover, it remains to be seen whether Croatia, with its quasi-fixed exchange rate to the EUR, will be able to return to a sustainable real convergence path to the level of prosperity in core Europe. Compared to the euro area, no real convergence has been discernible in Croatia over the past ten to twelve years, while in Slovakia, for example, income levels have risen by 20 percentage points in relation to the euro area. In this respect, it seems more advisable to wait and see whether Croatia can achieve real convergence under a quasi-fixed exchange rate after the adjustments of recent years. Otherwise, it does not necessarily make sense to simply enter the euro area with the current exchange rate, in the hope that only joining the euro will promote real convergence. 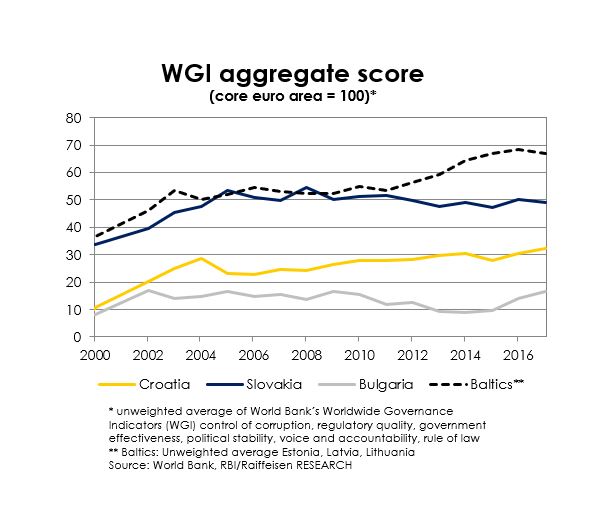 Experience in Slovakia has shown that long-term income gains can only be expected in the euro area if sustainable productivity gains and stability-oriented policies really catch up with the so-called core of the euro area. Furthermore, stricter procedures must be observed with regard to joining the euro area. Since being part of the area today also means membership in the SSM/SRM, further risk reduction and a comprehensive banking sector check under the auspices of the ECB would probably be necessary for the time being. If and when there is a shared agreement on such a process, the process itself could certainly take at least another six months before entry into the euro waiting room (ERM-II) is possible. From this point of view, therefore, euro entry in the early 2020s seems rather unlikely. Last but not least, overambitious expectations of joining a club (with increasingly sharpened entry criteria) have already been disappointed in case of Croatia. The accession to the EU was also a few years later than many overoptimistic commentators (local and sometimes international) expected. So, we would possibly add at least two to five years to overly ambitious Croatian euro adoption targets floating around in certain public speeches.

However, experience in other euro area countries has also shown that the question of euro area membership can help to build domestic reform momentum. Therefore, the goal of euro area membership can also help to pursue consistent economic policies beyond the electoral cycle (like it happened in Slovakia). On an interesting note, we have seen another round of institutional convergence (like it happened prior to the EU entry) in the Baltics, that might be linked to the euro area membership or not, following their euro area entry. That said, the question of normative euro area criteria fulfilment looks a bit overemphasized for some local observers in Croatia. On the other hand, there is little talk about the sustainability of the existing policies and structural issues on the ground. However, Croatia is a country of constantly stagnant competitiveness because its comparative advantages have never been exploited and the market economy is often damped by extensive state interference. This is a consequence of its very weak institutional environment and a low rule of law. Both of these should be strengthened to create the necessary better business environment. In addition, all the required structural reforms (state administration, local and regional government, healthcare, education, etc.) continue to be slow and insufficiently resolute. Therefore, Croatia should be aware that the removal of currency risk alone will not solve the deeply rooted weaknesses of the economy. The economy of prosperity requires the long known “homework” to be done.

Zrinka Zivkovic-Matijevic is Director of Economic and Financial Research at Raiffeisen Bank Croatia.