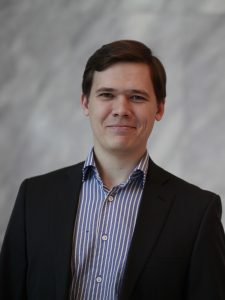 The times of more radical changes and upheavals in the Russian banking sector seem to be over for now. Following years of more subdued profitability (from 2014-17) the Return on Equity (RoE) rebounded nicely in 2018 – a trend that continued in 2019. We also see no drastic changes in market shares in 2019 to date. In particular, the market share of state-owned banks is no longer increasing significantly. This is also due to less drastic structural changes than before. After years of tough cleansing, bank closures continue, but at a much more moderate pace. Currently there are still 454 banks operating in the country, at the turn of the year 2018/19 there were “only” 30 more (484). In the previous years, some 80 to 100 banks were closed per year.

Moreover, “headline risks” for the Russian banking sector – resulting from a possible escalation of sanctions by the US – have decreased somewhat. For the time being, we do not expect a hard and immediate unilateral escalation due to a mix of domestic US policy trends and a currently somewhat less confrontational positioning between Russia and the West, respectively the US. So, it comes as no surprise that relative stability returned to international bank exposures towards Russia. After the hard reduction of Russia-related positions at international banks from 2013 until the turn of 2016/17 (going hand in hand with an overall steep external deleveraging), exposures of international banks towards Russia fluctuated since then and also in 2019 at a level of just over 100 billion US dollars – with a slight upward trend recently. Above all, local business (locally funded, in local currency) has been expanding over the last two to three years via local subsidiaries of international banks – as far as possible despite sanction risks. As of now (2019) these businesses account for almost half of the international banks’ exposure to Russia. Four to five years ago, this was only 25 percent of Russia-related exposures at international banks, the rest was cross-border, international business. 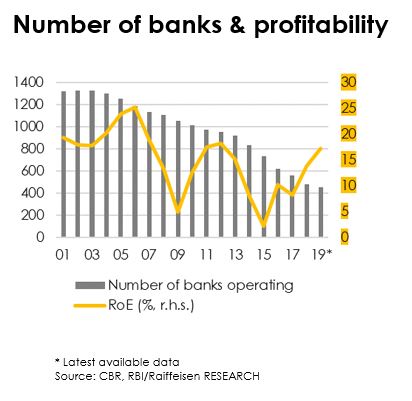 The sluggish but stable macroeconomic background allows the Russian banking sector to secure mid-teens RoE readings. For the first seven months of 2019 the RoE ratio came in at 17.3 percent, up from 13.8 percent in 2018, though mainly thanks to technical one-offs related to the introduction of IFRS9-like principles in the local GAAP. Among important profitability drivers one is standing out: the retail segment delivering annual growth rates in excess of 20 percent and powered equally by residential mortgages and unsecured loans. In the wake of still low penetration levels, the secured portfolio is not a major concern. However, the same is not valid for consumer finance, where Russia already displays a medium positioning in terms of households’ leverage from a cross-country comparison, which justifies the increasing regulatory attention to this market segment.

Speaking of corporate lending, the Central Bank’s (CBR) return to monetary easing so far fails to fully enliven the picture, with average growth rates languishing around three-five percent per annum (net of FX effects) and supported mainly by RUB loans. Here, the credit supply centers around large banks better positioned in the tough competition for creditworthy borrowers and further benefiting from a solid deposit funding situation. Although there are no major imbalances in the aggregate picture for the risk costs, the system sends reminders of high single-obligor concentration for individual banks, this time around as some (private) lenders could not keep the charges below the 1.5 percent mark in H1 2019 due to deterioration of certain sizable exposures. We additionally note that the banks’ P&L and capital standing remains susceptible to FX volatilities – despite a clear de-dollarization trend, around a quarter of corporate loans is still denominated in FCY (mainly U.S. dollar).

So far so good in terms of relative stability in the banking sector and currently we see only moderate downside risks. Especially in the (unsecured) retail business, of which some observers are critical and where there had been signs of overheating, we see less risks as a result of toughened regulation. The growth has been associated with the recovery of the market long enough, where banks were maintaining their underwriting standards. Indeed, referring to the CBR data by vintages, less than four percent of consumer loans originated in H1 2018 turned sour on their twelfth month of life, which compares favorably to the previous retail lending boom of 2012/13 (up to 10 percent). 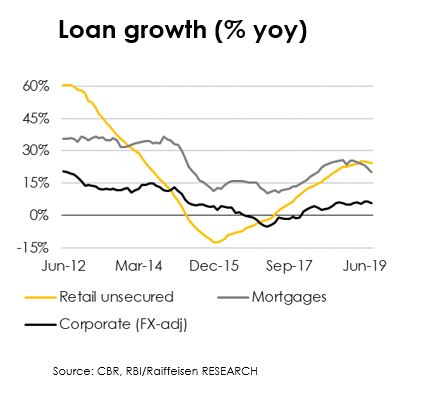 That said, the credit expansion started to betray a shift toward more leveraged borrowers, as hinted inter alia by the increasing tenors and rising share of loans used to refinance existing debt (estimated at 20 percent). Although still moderate overdue 90+ NPL levels (8.4 percent in July 2019) do not speak for imminent threats, we generally welcome the regulator’s orderly action to cool off the market through progressive step-ups in risk weights, since recently also keyed to borrowers’ payment-to-income (PTI) status. The measures are yet to fully reverberate into the dynamics of unsecured lending (+24.4 percent year-on-year in July 2019), but should make it costly for banks to get too adventurous.

As a drawback however, the restrictive policy also cuts profit options. Against the general backdrop, we therefore see only limited upside potential from where we are now. The growth momentum in the banking sector as a whole – apart from a softening retail business – should remain subdued, given our cautious macroeconomic outlook. Moreover, (net) interest margins should continue to come under pressure in the medium term (also induced by a further and decisive CBR easing), while risk costs are not expected to ease drastically. Furthermore, we do see a political appetite for a higher contribution from the banking sector to boosting overall economic growth.

All in all, the environment for doing banking business in Russia seems to be OK, although we do not expect an easy return to times where RoE readings close to 20 percent or above that had been feasible for the whole sector. Nevertheless, certain players that are well positioned in the market continue to achieve very solid profitability figures – which, however, also suggests a need for further consolidation and restructuring in the rest of the sector.  This is also due to the fact that there are a number of extremely progressive market players, who serve the urban population and middle class with an extremely high affinity for digital solutions. Those players may increasingly pull away clients from other less sophisticated players in the coming years. In this respect, however, the Russian banking market is also of immense strategic importance for the foreign/Western banks that remain there and are deeply rooted in the, by international standards, digitally very sophisticated marketplace.