Vienna is known for many things – coffee house culture, Sachertorte, Schnitzel – but when it comes to giving the city a label, Vienna has always been the capital of dancing and balls. More than 400 balls take place in Vienna every year, the most famous and internationally recognized one being of course the Opera Ball at the Vienna State Opera. But the Opera Ball is by far not the only legendary ball in Vienna. Many professional guilds (e. g. the chimney sweeps, the pharmacists and the confectioners), most larger universities (e.g. the BOKU – University of Natural Resources and Life Sciences, the TU – Technical University of Vienna and WU Vienna – Vienna University of Economics and Business) as well as many schools have their own yearly balls. Many of the larger ones are taking place in the Vienna City Hall and the Imperial Palace, but also the many palais and mansions as well as some luxury hotels of the city are housing numerous ball events every year.

“Same procedure as every year”

That’s probably a bit too strictly stated, but balls indeed follow defined ceremonial patterns. The ballroom season officially starts with the Carneval season on 11 November and ends on Shrove Tuesday. There is nearly no day without a ball event during this timeframe,  but as always there are some exceptions – one example being the Concordia Ball of the Austrian press club, which is also one of the oldest balls taking place since 1863 and usually scheduled in May or June.

Apart from the date, a certain procedure is foreseen for the event itself, especially for the opening part, which is managed by the so-called “master of ceremonies” – often a dancing master – who is basically responsible to arrange the appearance of all the different artists and important personalities partaking. There can be different performances by singers, dancers or similar and different speeches. A fixed element is a debutants’ committee dressed in black tuxedos or tails and white dresses, who first dances a polonaise showing of nice black-and-white effects while performing. At the end of the opening ceremony, the debutants start a Viennese Waltz and the event is officially opened with the words “Alles Walzer!”, inviting all guests to join them on the dance floor. 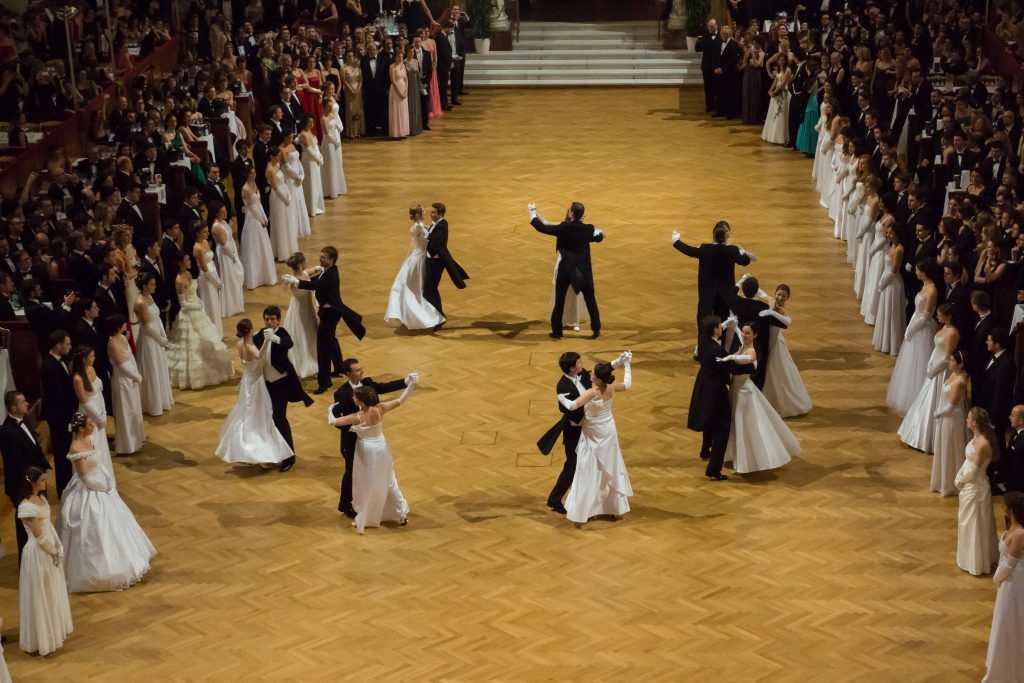 Fun fact on the side: The words “Alles Walzer” are also sometimes used in the German language to humorously ask people not to stand glued to the spot but to move around freely instead.

Dress up or leave

The dress code is a quite strict affair when it comes to Viennese balls. Depending on the specific event and the location, long evening gowns for the ladies and tuxedos or tails for the gentlemen are not only expected, but mandatory. In many cases, people not fulfilling the required clothing (which is usually stated on the event’s website and tickets), will be rejected when trying to enter. So, if you decide to visit a ball as a tourist or on business trip, make sure to come prepared. Important to know for visiting ladies: White dresses are not forbidden but designated for the debutants. It is therefore not common for other guests to wear all-white dresses. 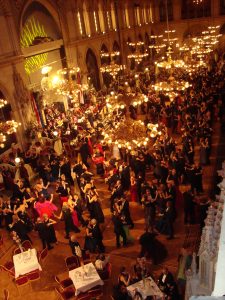 It might become a bit more outdated every year, but it is still not uncommon for young Viennese people to attend a dancing school to join at least one ballroom dancing class. At a classic Viennese dancing school, you are taught at least the basic steps and moves of most of the so-called “World Dance Programme” dances, among them of course also the famous Viennese Waltz. If taught and learned properly, this enables you to not only dance with your significant other, but with any dancing partner that knows the basics. Even though this tradition is not so common anymore, it once was proper behavior for gentlemen to dance at least one dance with every lady seated on their table at a ball. Other typical dances taught at dancing schools and played and danced at balls are English Waltz, Cha-Cha-Cha, Tango, Rumba, Quickstep, Jive and Samba.

No matter if you took dancing lessons or not, there is one dance which is part of every large Viennese ball, that you will be able to join and enjoy: The Fledermaus-Quadrille composed by Johann Strauss II and traditionally played at midnight and sometimes a second time later during the night. Long rows of dancing couples are set up always facing another couple and a dancing master instructs the steps. As ballroom newbies mix here with experienced dancers, who might know the steps but sometimes cause mischief by switching the roles of the ladies’ and gentlemen’s dancing parts, the quadrille traditionally ends in a muddle and a lot of laughter.

Many ball guests decide to leave after the “Midnight-Quadrille” and the midnight stage shows, which is a pity, as the fun actually only ends at four or five a.m. Anyways, when you leave, the ladies will receive a so-called “Damenspende” at the exit, a little gift, which varies from a fancy lipstick to a sweet treat or other things. Nowadays, there is sometimes also a “Herrenspende”, meaning a small gift for the gentlemen as well, however, this is still not as common as the Damenspende. 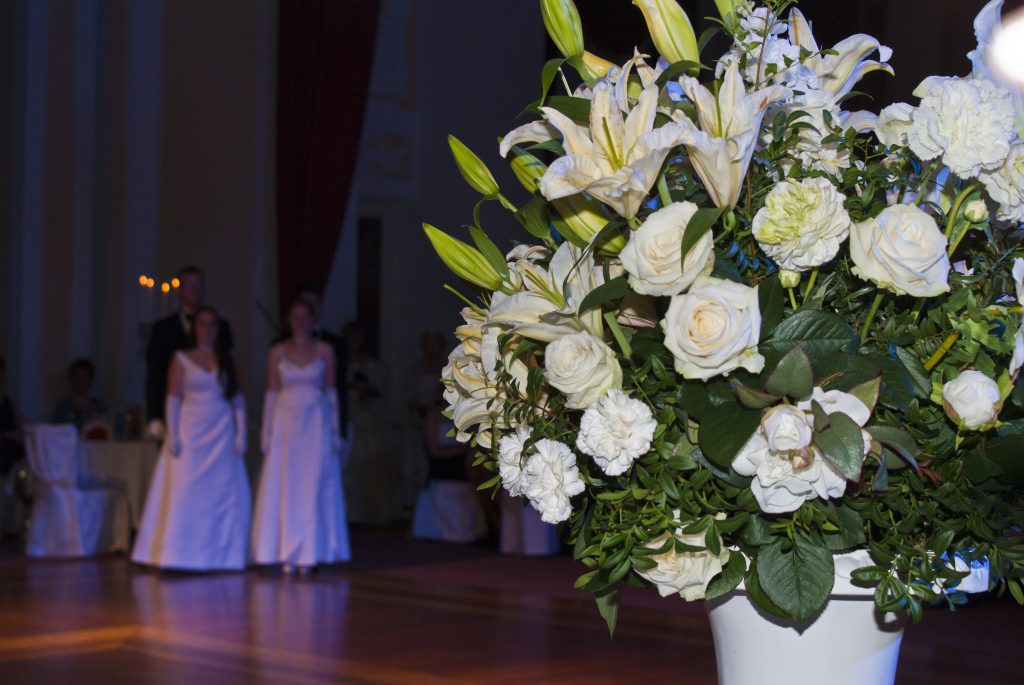 If you really hold out until the end, you will be there to hear the last song played by the orchestra, which not always, but traditionally is the Waltz “Brüderlein fein” from the piece “Der Bauer als Millionär” by Ferdinand Raimund. And after the last waltz has ended, there is another tradition you should be aware of: On most balls the guests are allowed to take off the floral decorations in the location and take them home with them. But mind you: This is only allowed after the end of the very last song. It is very much frowned upon if guests start to destroy the beautiful decoration earlier than that. Paradoxically, one of the few exceptions to this tradition is the ball of flowers, because its flamboyant flower decoration is “recycled” at another ball on the next day.

And if you really managed to hold out until the morning, the circle of our expedition into Viennese ballroom culture will close at a coffeehouse as the traditional way to end a ball night is to have a champagne breakfast at a typical Viennese café and afterwards get your well-deserved rest.